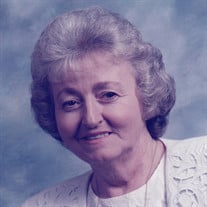 Mable Ann Betts, 82, of Delmar passed away at her residence on September 2, 2019. Born June 26, 1937, she was the daughter of the late Ernest H. Lewis and M. Irene Lewis of Salisbury. Mable worked as a bookkeeper her entire career. She worked for H.S. Todd Co., Hancock GMC, Wm. P. Hearne Produce Co., and then Car Care in Salisbury, MD. She was also self-employed with her husband, William J. Betts, at J&M Trucking Company. She finally retired due to her disability. When her children were younger, Mable loved camping and horseback riding. After the children were grown, she traveled with her husband. They criss-crossed the U.S. in an eighteen wheeler. After her husband’s passing, she enjoyed several trips across the U.S. with her brother and sister. Mable also enjoyed being a member of the Women of the Moose. Over the years, she held every office available, from Star Recorder to Senior Regent multiple times. She was awarded a Lifetime Achievement Award in 2014. She was a member of United Methodist Church in Salisbury which then moved to Fruitland and became Impact Church of Fruitland. As her disability worsened, she moved her membership to Faith Wesleyan Church in Delmar until the church closed. She then attended Faith Baptist Church in Delmar until being put under hospice care. She is survived by three children, daughter, Dawn L. Raines and her husband Clyde; son, David E. Littleton; and stepdaughter, Bonnie Hudson and her husband Mike. She had one granddaughter, Jessica D. Cropper, and one great grandson, Kai A. Cropper. She is also survived by her brother, Ernest H. Lewis, Jr., of Salisbury and one sister, Elsie E. Phalen of Westbury, NY. There are also many beloved nieces and nephews. Mable was preceded in death by her husband, William J. Betts of Delmar; her son, Michael B. Littleton of Salisbury; and her former husband, William V. Littleton of Salisbury. Services will be private. Arrangements are in the care of Short Funeral Home in Delmar. Online condolences may be sent to the family by visiting www.shortfh.com.

Mable Ann Betts, 82, of Delmar passed away at her residence on September 2, 2019. Born June 26, 1937, she was the daughter of the late Ernest H. Lewis and M. Irene Lewis of Salisbury. Mable worked as a bookkeeper her entire career. She worked... View Obituary & Service Information

The family of Mable Ann Betts created this Life Tributes page to make it easy to share your memories.

Mable Ann Betts, 82, of Delmar passed away at her residence on...

Send flowers to the Betts family.