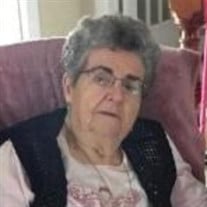 Lura V. Gordy Adkins, 90, passed away at Peninsula Regional Medical Center in Salisbury on Thursday, March 26, 2020. She was born August 16, 1929. Lura and Lloyd lived together in their home on Park Row for over 60 years until his death on April 15, 2015. She was the oldest daughter of Walter D. and Ella Cottingham Gordy. Her first job was with C&P Telephone Company in Snow Hill where she learned to work the switchboard long before dial connections came about. This was her most favorite job. After dial telephone took over, she held other jobs. The last being Calvin B. Taylor Bank in Snow Hill from where she retired. She enjoyed traveling, acquiring antiques and collecting salt cellars (used before salt shakers). She was the oldest living member of Bates Memorial United Methodist Church in Snow Hill, Maryland. She was a member of the Order of the Eastern Star Snow Hill Chapter 102, and the SHVF Ladies Auxiliary. She truly enjoyed spending time with family, especially her grandchildren and great grandchildren. She is survived by her son, Richard A. Adkins; a daughter, Barbara A. Tribeck (Gerry); daughters-in-law, Cheryl and Joan; grandchildren, Shawn Adkins, Curtis (Amber) Adkins, Puller Adkins, Kathryn “Kate” Adkins, Hunter Adkins, CPO Kevin C. Tribeck USCG(April), MKL Jason Tribeck, and Allison A. Esham (Joe); great grandchildren, John(Ashley) , Penelope and Jack Adkins; her youngest sister, Mary G. Chase; five sisters-in-law; and a brother-in-law. There are numerous nieces and nephews as well as great and great great nieces and nephews. In addition to her parents, she was preceded in death by her husband, Lloyd A. ; sons, W. Keith (May 11, 2005) and Gene G. Adkins (Aug. 23, 2011); sister, Louise G. McGrath; brothers, Paul D, and Richard C. Gordy; numerous in-laws; and her four-legged children over the past 39 years, Comet, Sunshine and Duchess. Services are pending due to the present COVID-19 restrictions and will be scheduled at a later date. In lieu of flowers, memorial contributions in memory of Lura may be made to Bates Memorial United Methodist Church memorial fund, or the building fund at Bates, Mount Olive United Methodist Church or the Mt. Olive Methodist Cemetery fund on Mt. Olive Church Road. Online condolences may be sent to the family by visiting www.shortfh.com. Arrangements are in the care of Short Funeral Home in Delmar.

Lura V. Gordy Adkins, 90, passed away at Peninsula Regional Medical Center in Salisbury on Thursday, March 26, 2020. She was born August 16, 1929. Lura and Lloyd lived together in their home on Park Row for over 60 years until his death on... View Obituary & Service Information

The family of Lura V. Gordy Adkins created this Life Tributes page to make it easy to share your memories.