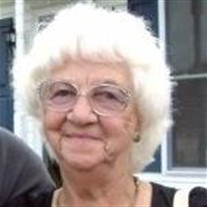 Laurel- Lucy M. McInvale, 90, of Laurel, passed away Monday, November 27, 2017 at Delmar Nursing and Rehabilitation Center after a short stay. She was born June 7, 1927 in Raven, Virginia, a daughter of the late Charles William Price and Myrtle Hess Price. Lucy worked many years as a seamstress for several garment companies in the Salisbury and Delmar area. She was a long time member of Liberty Church of Christ in Salisbury where she was very active until her health began to fail. In her younger days she took great pride in her appearance and always made sure her hair and makeup was just right. She enjoyed cooking, gardening, traveling and just loved people. She will be remembered as a loving mother, grandmother, great grandmother and sister. She is survived by by sons, Harold E. Strouth and wife, Diane and Billy W. Strouth and wife, Linda, all of Salisbury; 14 grandchildren; several great grandchildren; nephews, Roger Elswick and Dexter Elswick; and several other nephews and nieces. She is also survived by her lifelong friend, who was like a sister to her, Pat Hall. In addition to her parents, she was preceded in death by her husband, Jessie L. McInvale; a daughter, Patricia Ann Cromer; a son, Stevie Strouth; a grandson, Donald Strouth; and many brothers and sisters. A visitation for family and friends will be held on Friday, December 1, 2017 from 10:00 to 11:00 a.m. at Short Funeral Home in Delmar, followed by a funeral service, which begins at 11:00. The Reverend Phillip Lee will officiate. Interment will follow at Springhill Memory Gardens in Hebron. Memorial contributions may be made in her memory to the American Diabetes Association, P.O. Box 11454, Alexandria, VA 22312. Arrangements are in the care of Short Funeral Home in Delmar. Online condolences may be sent to the family by visiting www.shortfh.com.

Laurel- Lucy M. McInvale, 90, of Laurel, passed away Monday, November 27, 2017 at Delmar Nursing and Rehabilitation Center after a short stay. She was born June 7, 1927 in Raven, Virginia, a daughter of the late Charles William Price and Myrtle... View Obituary & Service Information

The family of Lucy M. McInvale created this Life Tributes page to make it easy to share your memories.

Send flowers to the McInvale family.