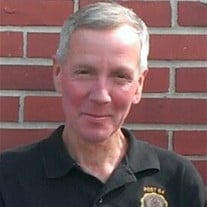 Louis E. Kenney, 66, of Salisbury, Maryland, passed away on Monday, August 27, 2018, at Coastal Hospice at the Lake. Born and raised in White Haven, Louis was a son of the late Herman and Laura Kenney. After graduating from Bennett High School, he enlisted in the U.S. Navy and served four tours in Vietnam aboard the USS James Owens and the USS Long Beach. He would eventually retire from Air Industries in California and return to his native Maryland, where he worked for Wicomico County Roads as a ferry operator until his illness. An avid outdoorsman, he was grateful to spend his workdays on the water. A talented photographer, Louis could often be found with a camera in his hands. He also enjoyed reading, listening to music, watching movies, traveling to new and familiar places, and getting outdoors to hunt, fish, and ski. He delighted in spending time with friends and family. Active in his community, he was a lifetime member of the American Legion Post 64; the Disabled American Veterans; and the Delmar VFW Post 8276. He was also a past District Commander of the Southeastern Shore Region for the American Legion and a member of the Sons of the American Legion - Squadron 64; the Voiture 40/8 - Local 122; the Vietnam Veterans of America - Chapter 1091; the Moose Lodge 654, the Redmen Lodge - Tony Tank Tribe 149; and the Community Emergency Response Team in both California and Maryland. He is survived by his wife, Melba A. Kenney; stepdaughters, Candice Bradshaw (Michael) and Heather Klatt (Matthew); step-grandchildren, Zoe Michelle and Charlie; a brother, Howard Kenney (Debbie); a sister, Sandra Grove; and several cousins, nieces, and nephews. In addition to his parents, he was preceded in death by a sister, Patsy Morley, and a brother, Jeff Kenney. A memorial service for family and friends will be held at 11:00 a.m. on Thursday, August 30, 2018, in the chapel of Springhill Memory Gardens in Hebron. Chaplain Russell Franklin, Ernie Price, and Ray Hoffman have graciously agreed to lead the sharing of good memories. Those attending are encouraged to wear casual attire. The interment will be private. The family would like to extend a special thank you to all those who offered support with prayers, visits, and help with daily tasks. In lieu of flowers, memorial donations may be sent to the Hebron Volunteer Fire Company at P.O. Box 300, Hebron, MD 21830; directed to the We Honor Vets program at Coastal Hospice at the Lake at PO Box 1733, Salisbury, MD 21802; or sent to St. Jude Children’s Research Hospital at www.stjude.org. Arrangements are in the care of Short Funeral Home in Delmar. Online condolences may be sent to the family by visiting www.shortfh.com.

Louis E. Kenney, 66, of Salisbury, Maryland, passed away on Monday, August 27, 2018, at Coastal Hospice at the Lake. Born and raised in White Haven, Louis was a son of the late Herman and Laura Kenney. After graduating from Bennett High School,... View Obituary & Service Information

The family of Louis E. Kenney created this Life Tributes page to make it easy to share your memories.

Louis E. Kenney, 66, of Salisbury, Maryland, passed away on Monday,...

Send flowers to the Kenney family.