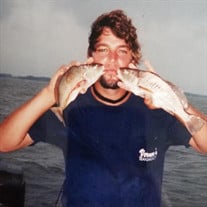 Lonnie Richard Figgs, 49, proud father, son, roofer and coach, of Delmar, passed away Saturday, October 30, 2021. He was born October 23, 1972 in Salisbury, a son of Phillip A. Figgs of Delmar and the late Elizabeth Ann (Smart) Figgs. Lonnie graduated from Delmar High School with the class of 1990, where he was a member of the wrestling team. In his younger days, he learned the roofing and building trade while working for Peninsula Roofing before going out on his own. He fulfilled his dreams of owning his own business in 2000 when Elite Roofing and Home Improvements was started. He was good at working with his hands and had a reputation as one of the best roofers on the shore. Lonnie loved working with youth sports and coached the Delmar High Varsity wrestling team and several youth soccer teams through Wicomico County and at Crown Sports Center. He loved the outdoors, surfing, spending time at the beach and was an avid fisherman. He also enjoyed hunting when it was too cold to fish. He served several years in the Delmar Town Council. He will be remembered for his wonderful sense of humor and the pride he had for his kids. He is survived by his father, Phillip A. Figgs and his companion, Cheryl Twilley; the mother of the his children, Tallie R. Figgs; sons, Seth Figgs and his fiancé, Sarah Staton of Ocean City and Luke Figgs and his companion, Madisen Shoemaker of Delmar; daughters, Cassie Figgs and Ellie Figgs of Delmar; his beloved twin granddaughters, Nollie and Nova; sister, Kimberly Ann Johnson and husband, Cale of Delmar; nieces, Kenzie Williams and husband, Jordan, Kelsey Johnson and Kaylin Johnson; a special cousin who was like a brother to him, Rodney Smart; and many aunts, uncles and cousins. A visitation for family and friends will be held on Monday, November 8, 2021 from 2:00 p.m. to 4:00 p.m. at Short Funeral Home, followed by a celebration of Lonnie’s life which begins at 4:00. Arrangements are in the care of Short Funeral Home in Delmar. Online condolences may be sent to the family by visiting www.shortfh.com.

The family of Lonnie R. Figgs created this Life Tributes page to make it easy to share your memories.

Send flowers to the Figgs family.