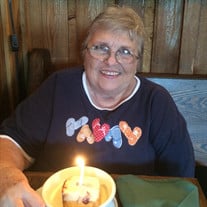 Riva- Linda Anne (Davis) Adkins, 80, of Riva, and formerly of Parsonsburg, passed away peacefully on Thursday, January 3, 2019 at Anne Arundel Medical Center in Annapolis. She was born August 23, 1938 in New Church, Virginia, a daughter of the late Willie A. Davis and Evelyn Bailey Davis. For many years Linda was an active member of the Snow Hill Old School Primitive Baptist Church. She worked in sales for Sears and Roebuck in her younger years before entering the banking field where she spent 15 years as a head teller for several banks. She enjoyed sewing, drawing, canning and being a homemaker and a mom and really enjoyed watching Western movies. She found true joy when her grandchildren and great grandchildren came along and she was happiest when playing with them. She will be remembered for her wonderful sense of humor and for being slightly ornery now and again. If she teased you, you knew she loved you. She is survived by sons, Richard S. Adkins, Jr. and David Scott Adkins, both of Riva; a daughter, Rebecca A. Schilling and her husband Keith of Delmar; grandchildren, Daniel Schilling, Amanda Crockett (Dave), Kerri Workman and Melissa Schilling; and great grandchildren, Elizabeth, Lillian, Rylan and Harper. She is also survived by many extended family members In addition to her parents, she was preceded in death by her beloved husband. Richard S. Adkins, Sr., who passed in 2000; and brothers, Billy Davis, Jr. and Lawrence Davis. A visitation for family and friends will be held on Wednesday, January 9, 2019 from 7:00 pm to 9:00 pm at Short Funeral Home in Delmar. A graveside service will be held on Thursday, January 10, 2019 at 11:00 a.m. at Forest Grove Cemetery in Parsonsburg. Elder Bob Lackey will officiate. Memorial contributions may be made in her memory to the Greenbaum Cancer Center, University of MD Medical System, 22 S. Greene Street, Baltimore, MD 21201. Arrangements are in the care of Short Funeral Home in Delmar. Online condolences may be sent to the family by visiting www.shortfh.com.

Riva- Linda Anne (Davis) Adkins, 80, of Riva, and formerly of Parsonsburg, passed away peacefully on Thursday, January 3, 2019 at Anne Arundel Medical Center in Annapolis. She was born August 23, 1938 in New Church, Virginia, a daughter of the... View Obituary & Service Information

The family of Linda Anne Adkins created this Life Tributes page to make it easy to share your memories.