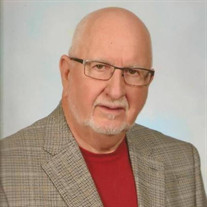 Layne W. Kerley, 80, passed away at his home in San Antonio on Friday, August 27, 2021. Layne was the last of five children of Russell Kerley and Pearl Tingle Kerley. He was predeceased by his brother, “Bunk” in 1957; his dad, Russell in 1961; his mother, Pearl in 1990; brother, Kenneth in 1993; sister, Elnora in 2003 and sister, Grace in 2009. He was born on October 9, 1940. He graduated from Wicomico High School with the class of 1958 and entered the United Air Force in Nov. 1958. He married Marilyn K. Williams in Oct 1963 in Azores. During his military career, he served as Chaplain Manager in Langley AFB, Azores AFB, Ellsworth AFB SD, Chanute AFB IL, Ramstein, Germany AFB, and retired from Lackland AFB TX. After retiring, he worked in civilian service for 17 years at Lackland. Layne served as organist for Trinity United Methodist Church for 38 years. In the meantime, he enjoyed adventures traveling in Europe, annual visits to his family in Melson and he loved returning for Wi-Hi class reunions. He is survived by nieces, Linda Boyer, Pam Smith, Glenda Fisher and Dawn Kerley; nephews, Gary Williams, Wyatt Kerley, Jay Kerley and Philip Kerley: and sister-in-law, Mary Louise Kerley. He leaves behind several cousins, Wi-Hi classmates, and many friends in San Antonio. Special thanks to the nurses and doctors at MD Anderson Cancer Center, University Hospital, St Lukes Hospital and NE Methodist Hospital during his year-long battle with cancer plus Vitas Hospice in last two weeks. A very special thanks to Greg Brakel, Misha Misaki, Wiley Smith, and all the members of Trinity United Methodist in San Antonio. A very special thank you to Rhonda Evans. In lieu of flowers, donations can be made to Melson United Methodist Church, 32705 Melson Road, Delmar, MD 21875. A graveside service will be held at Melson United Methodist Church Cemetery, Delmar, MD on his 81st birthday, October 9th at 3:00 p.m. and Celebration of Life immediately following at the Melson Community House. Arrangements are in the care of Short Funeral Home in Delmar. Online condolences may be sent to the family by visiting www.shortfh.com.

The family of Layne W. Kerley created this Life Tributes page to make it easy to share your memories.

Send flowers to the Kerley family.