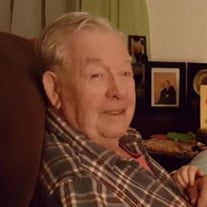 Lawrence Grayson “Pat” Walker, Jr. 95, of Laurel, and formerly of Sunset Beach, Maryland, passed away peacefully at his home on Tuesday, August 25, 2020, surrounded by his loving family. He was born November 13, 1924 in Baltimore, a son of the late Lawrence Grayson Walker, Sr. and Carrie VanEverah Walker. Pat graduated from Glen Burnie High School before earning his degree from the University of Maryland and Maryland Institute of the Arts, with a drafting degree. Pat honorably served his country in the US Army during World War II and was discharged as a SGT in 1945. After the war he returned home and used his highly skilled hands to build homes. He built hundreds of homes mostly across Anne Arundel County and even built the home where he passed in Laurel, of course with the help of his daughter. Along with his father, he was a long time member of the Rivera Beach Volunteer Fire Department and also served as Past Exalted Ruler of the Elks. Pat played semi-pro football for many years in the Anne Arundel County area and loved the Baltimore Colts and Ravens. In his free time he could be found fishing the rivers and tributaries of the Chesapeake Bay and shared his love of fishing with his children and grandchildren. He is survived by 3 children, Gail L. Oursler (Richard B., Jr.), Lawrence Grayson Walker, III (Anne) and Richard W. Walker; a daughter-in-law, Nichole Walker; grandchildren, Grayson Morris, Erica Young, Amanda Foster, Justin Walker, Katelyn Walker and Laura Walker; great grandchildren, Giovanni and Alayah; a brother, Warren Walker (Patricia); a sister, Linda Evans; and nieces and nephews, Virginia Shifflett, Sandy Myer, Jay Warren Walker, Chris Walker, Michael Walker, Page Dunkerly, Donna Bates, Wendy O’Neill, Mark Evans and Laura Beth Evans. In addition to his parents, he was preceded in death by his beloved wife of many years, Ruth M. (Wickard) Walker, who passed in 2009; a daughter, Gwenn Steadman; a brother, Donald Walker; and a brother-in-law, Fred Evans. A visitation for family and friends will be held on Monday, October 5, 2020 from 1:00 pm to 2:00 at Short Funeral Home in Delmar, followed by a celebration of his life beginning at 2:00. Pastor Chuck Reynolds will officiate. Memorial contributions may be made in his memory to VITAS Healthcare, 30265 Commerce Drive, Suite 202/203, Millsboro, DE 19966 or to Wounded Warriors by visiting http://woundedwarriorproject.org/ . Arrangements are in the care of Short Funeral Home in Delmar. Online condolences may be sent to the family by visiting www.shortfh.com.

The family of Lawrence Grayson Walker Jr. created this Life Tributes page to make it easy to share your memories.

Send flowers to the Walker family.