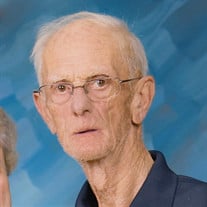 DELMAR- Lacey K. Figgs, 82, of Delmar, passed away peacefully with his family by his side on Monday, December 3, 2018. He was born May 26, 1936 in Philadelphia, a son of the late Lacey K. and Annie Grant Figgs. Lacey’s family moved back to Delmar when he was a child and he graduated from Wicomico High School with the class of 1955. After graduation he proudly served his country in the U.S. Navy from 1955 to 1959. On June 14, 1958 he married his sweetheart, Joyce L. (Carey) Figgs and together they spent 60 years raising their family and serving their community. He retired in 1996 after 35 ½ years of service at DuPont in Seaford where he worked as an electrician. After retirement he enjoyed delivering parts for Fisher Auto Parts in Salisbury. He was a member of Melson United Methodist Church in Delmar. He was a life member of the Delmar Fire Department with 58 years of service. At DFD he served in various capacities wherever needed and was always there to lend a hand to anyone who needed help. He enjoyed Cherokee Indian memorabilia, and flying and air shows. He is survived by his beloved wife of 60 years, Joyce L. Figgs; a son, Donald Figgs and wife, Andrea; a daughter, Kim Figgs; a grandson, Justin Figgs and wife, Angie; great grandchildren, Nevaeh and Noah; brothers-in-law, Norman Carey and wife Margaret and Alfred Matthews and wife, Yvonne; and several nieces and nephews. In addition to his parents, he was preceded in death by a sister, Dorothy Matthews. A visitation for family and friends will be held on Friday, December 7, 2018 from 6:00 p.m. to 8:00 p.m. at Short Funeral Home in Delmar, and also on Saturday from 12:00 p.m. to 1:00, followed by a fireman’s funeral which begins at 1:00. The Reverend John Oltman will officiate. Interment with military honors will follow at St. Stephen’s Cemetery in Delmar. Memorial contributions may be made in his memory to Melson United Methodist Church, 32705 Melson Road, Delmar, MD 21875 or to Delmar Fire Department, P.O. Box 143, Delmar, DE 19940. Arrangements are being handled by Short Funeral Home of Delmar. Online condolences may be expressed at www.shortfh.com.

DELMAR- Lacey K. Figgs, 82, of Delmar, passed away peacefully with his family by his side on Monday, December 3, 2018. He was born May 26, 1936 in Philadelphia, a son of the late Lacey K. and Annie Grant Figgs. Lacey&#8217;s family moved back... View Obituary & Service Information

The family of Lacey K. Figgs created this Life Tributes page to make it easy to share your memories.

Send flowers to the Figgs family.