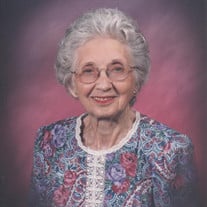 Delmar- Katherine S. Dukes, 89, of Delmar, passed away peacefully at her home, surrounded by her loving family, on Tuesday, April 13, 2021. She was born August 23, 1931 in Laurel, a daughter of the late Lorenzo and Sadie Mae (Moore) Scott. Miss Katherine and her late husband, Gene opened Dukes Jewelers in Sharptown where they operated for several years before moving to Delmar in 1957. She truly enjoyed helping people with jewelry and watch repairs and even in her later years continued to operate out of her home until just a few short years ago. She was very active serving the Delmar Community through memberships in the Delmar Lioness Club, the Delmar Lions Club, Order of the Eastern Star Adah Chapter 5 in Delmar, where she served as treasurer for many years and Order of the Eastern Star Roelma Chapter 113 in Sharptown. She was also a long time, active member of St. Stephen’s United Methodist Church in Delmar, where she sang in the choir for many years. She will be remembered as a wonderful cook, and baseball fan and an avid fan of the Alabama Crimson Tide football program. She is survived by her daughter, Lynn Parsons and husband, Manford of Laurel; a son, George H. Dukes of Bridgeville; grandchildren, Scott Dukes, Cody Graham, Gene Dukes, Shannon Harris, Stacey Dukes, Michael Parsons and Kristin Perdue; six great grandchildren; and sisters, Eleanor Hudson and Mary Clifton. She is also survived by several nieces and nephews. She was preceded in death by her husband, Gene T. Dukes, who passed in 1989; a daughter, Sandra Helms who passed in 2020; and a brother, Calvin Scott. A visitation for family and friends will be held on Monday, April 19, 2021 at Stephen’s United Methodist Church in Delmar from 10:00 a.m. to 11:00, followed by an Order of the Eastern Star Service which begins at 11:00, followed by a funeral service. The Reverend Phyllis Walton will officiate. Interment will follow at St. Stephen’s Cemetery. Memorial contributions may be made in her memory to St. Stephen’s United Methodist Church, 101 E. State Street, Delmar, DE 19940. Arrangements are in the care of Short Funeral Home in Delmar. Online condolences may be sent to the family by visiting www.shortfh.com.

Delmar- Katherine S. Dukes, 89, of Delmar, passed away peacefully at her home, surrounded by her loving family, on Tuesday, April 13, 2021. She was born August 23, 1931 in Laurel, a daughter of the late Lorenzo and Sadie Mae (Moore) Scott. Miss... View Obituary & Service Information

The family of Katherine S. Dukes created this Life Tributes page to make it easy to share your memories.

Send flowers to the Dukes family.