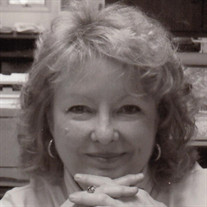 Judith Beth Given “Judi” passed peacefully at her home, from this life on Sunday, January 3, 2021, to be with her Heavenly Father and beloved sons, Brian and Matthew, after a long battle with metastatic breast cancer. She fought the good fight. She was born December 15, 1950 in Salisbury, a daughter of the late Willard and Waneta Corbett. She attended and graduated from Wicomico High School with the class of 1968. Judi was an intelligent and passionate person for the things she believed in. She qualified and received training from IBM and learned coding, an early accomplishment for a woman at that time. She went on to work for many state agencies over the years, including the correctional system, Maryland State Police and retired from the Department of Agriculture in Princess Anne in 2009. Among other things she was an accomplished artist, writer and published poet. She was a passionate champion for abused and mistreated children. With the assistance of her long-time friend, Bill Gray of Ocean City, they testified before the Maryland General Assembly and aided in writing legislation for rights and protection for children, for which she received the 1994 Governor’s Victims award from Governor William Donald Schaefer. Along with Pastor Sally Dolch, Judi helped in working to advance the mission of Life Crisis Center in Wicomico County. In addition to her husband Richard, she is survived by a step-son, Randall Given of Delmar; daughters-in-law, Samantha Wales of Catonsville and Emily Pelton of Baltimore; granddaughters, Chloe Watson, Marie Watson and Haili Given; grandsons, Isaac Watson, Theo Watson and Randall Given, Jr.; and several nieces and nephews. She is also survived by her adopted brother/friend, Bill Gray; and her beloved dog “Max,” who had top billing in the house. In addition to her parents, she was also preceded in death by her two sons, Brian and Matthew. Judi’s family would like to thank the nurses and staff of Coastal Hospice for the special love and care they provided to Judi in her last days. A visitation for family and friends will be held on Saturday, January 9, 2021 from 12:00 p.m. to 2:00 p.m. at Short Funeral Home in Delmar. Due to current gathering restrictions, masks and social distancing will be required. In lieu of flowers, donations may be made in her memory to the Life Crisis Center, c/o Tina Ciarmoli, P.O. Box 387, Salisbury, MD 21803. Arrangements are in the care of Short Funeral Home in Delmar. Online condolences may be sent to the family by visiting www.shortfh.com.

Judith Beth Given &#8220;Judi&#8221; passed peacefully at her home, from this life on Sunday, January 3, 2021, to be with her Heavenly Father and beloved sons, Brian and Matthew, after a long battle with metastatic breast cancer. She fought... View Obituary & Service Information

The family of Judith Beth Given created this Life Tributes page to make it easy to share your memories.

Judith Beth Given “Judi” passed peacefully at her home, from...

Send flowers to the Given family.