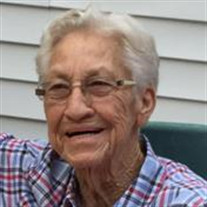 Joyce Ann Lewis, 86, of Salisbury, passed away peacefully on Saturday, July 25, 2020 at her home. She was born May 29, 1934 in Salisbury, a daughter of the late Louis W. Wells and Frances E. (Jones) Wells. Joyce retired after 30 years of service as a special education teacher for Wicomico County. She was an avid reader, a faithful fan of the Baltimore Orioles and loved trips to Assateague and playing games on her Nook. Any kind of seafood was her favorite food and nobody could prepare steamed clams and oysters for her quite like her son-in-law’s. Her greatest passion was her family and she made sure to be there for her children and grandchildren as they grew up, hardly missing a game, school play or whatever activity they were involved in. She is survived by her husband of almost 62 years, James E. Lewis, Sr.; a son, James E. Lewis, Jr. and wife Kim of Milford; a daughter, Debbie Mooney and husband Shawn of Mardela Springs; grandchildren, James Lewis and wife Lisa, Shanon Davis and fiancé Devon, Brittany Davis and fiancé Doug, Lexi Daino and Randy Daino; great grandchildren, Noah, Andrew, Hunter, Dakota, Annalynn, Skye, Waylon and Tatum; a sister, Kathy Robinson; and a brother, Louis “Sonny” Wells. She is also survived by many nieces and nephews and her beloved four legged companion, “Cindy.” In addition to her parents, she was preceded in death by brothers, Marshall Wells and Earl Wells. A celebration of Joyce’s life will be held at a later date. Memorial contributions may be made in her memory to Eastern Shore Veterinary Hospital, c/o Hogan’s Heroes Fund, P.O. Box 586, Laurel, DE 19956. Online condolences may be sent to the family by visiting www.shortfh.com. Arrangements are in the care of Short Funeral Home in Delmar.

Joyce Ann Lewis, 86, of Salisbury, passed away peacefully on Saturday, July 25, 2020 at her home. She was born May 29, 1934 in Salisbury, a daughter of the late Louis W. Wells and Frances E. (Jones) Wells. Joyce retired after 30 years of service... View Obituary & Service Information

The family of Joyce Ann Lewis created this Life Tributes page to make it easy to share your memories.

Joyce Ann Lewis, 86, of Salisbury, passed away peacefully on...