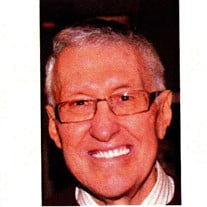 Laurel, DE – Joseph J. Pfister, 86, passed on October 19, 2019. He had been surrounded by family earlier in the day. Joe was born in Lewes, DE on January 11, 1933, son of the late Joseph J. Pfister, Sr., and Thelma (Joseph) Pfister. He attended Goldey-Beacom Business College and Loyola University in Chicago. Joe retired from the United States Air Force after spending 30 years in the Delaware Air National Guard, and other bases around the country, and 3 prior years in the Marines at Parris Island, SC. A devoted sports fan, and accomplished athlete, Joe played for the farm teams of the Pittsburgh Pirates and the Philadelphia Phillies for a few years in between colleges. He also loved the game of table tennis, and at one time ranked 70th in the world in that second-most popular game worldwide. In the year 2000, Joe started and ran the popular Newark Senior Center Table Tennis League for many years. Joe was an avid speaker, especially on patriotism, and at one time started a speakers’ bureau in the Air Force. As a result, he was recipient of many awards, including the Valley Forge Freedom Foundation Award, twice. He was the first enlisted man to have his works placed in the Congressional Record, and the first to speak before the Joint Chiefs of Staff. He also hosted a TV show called, “Access Delaware”, from 1991 to 1996 on the local cable channel. In 2018, he wrote and published his first book, “Eden II”. Joe is survived by his wife of 28 years, Nancy (Powell) Pfister, his sister, Dolores (Robert) Woolworth, his children, Christopher (Cindy), Deanne (David Daviaux), Darren (Paula), Stephenie Lynch, his grandchildren, Kristen Stubbs, Brandon Pfister, Lauren Church, Ellen Pfister, James Pfister, Zachary Lynch, John Lynch, Dashaun Griffin, Daraius Matthews, and 12 great-grandchildren. In addition to his parents, Joe was predeceased by his daughter, Candace (Pfister) Fischer. In lieu of flowers, memorial contributions may be sent to Coastal Hospice, P.O. Box 1733, Salisbury, MD 21802 or to www.garysinisefoundation.org, which gives support to help those who have served our country. Family and friends are invited to come to Joe’s Life Celebration at Five Rivers Church located at 290 Whitehall Road, Elkton, MD 21921 on Monday, October 28, 2019, from 10 am to 11 am for visitation, and 11 am for the service. The burial will be private.

The family of Joseph J. Pfister Jr. created this Life Tributes page to make it easy to share your memories.

Send flowers to the Pfister family.