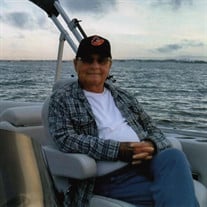 Joseph Michael Parker, 72, beloved husband, father, grandfather and friend, passed away peacefully on Sunday, February 14, 2021 at his home in Frankford after a long battle with several health issues. Mike was born on October 27, 1948 in Raleigh, North Carolina and moved to the Baltimore area when he was young. Not long after high school graduation, he enlisted in the U.S. Army and proudly served his country during the Vietnam War. After his return from Vietnam he married his sweetheart, Deborah G. Webster on July 25, 1970, and together they were blessed to share 50 years of marriage. They raised their family in Sykesville until moving to the Eastern Shore a few years ago. Mike played soccer in his youth and after his playing days ended he enjoyed coaching his son through his youth soccer days. Mike retired from Honeywell, where he worked many years as a sub-contractor for NASA. His prized possession was his 1973 Corvette Stingray. He tinkered on that car for many years and recently was able to finally finish the orange paint job on it. He enjoyed sports as well, and was an avid Baltimore Ravens fan. Mike had to fight for everything his whole life, including all that he endured during his heart transplant and other recent health issues. He always credited his wife Debbie and her parents for saving his life and giving them the family that he always wanted. Mike loved it in Delaware where he had many great friends who he enjoyed fishing with, dining out, going to car shows and hanging out with. Spending time with family, friends and his beloved Shelties made Mike’s life complete. In addition to his wife Debbie, he is survived by his daughters, Stacie Krauss (Tod) of Westminster, MD and Kristie Grachik (Mike) of Delmar; a son, Chad Parker (Denise) of Westchester, PA; and beloved grandchildren, Sierra, Tanner, Trey, Hunter, Kolby, Ty and Grace. A visitation will be held on Saturday, June 12, 2021 from 2:00 to 4:00 p.m. at Roxana Volunteer Fire Co., 35943 Zion Church Road, Frankford, DE 19945. T he family would love for you to think of Mike when you pass a soccer field, see Old Glory flying or get passed on the road by an orange Corvette. Arrangements are in the care of Short Funeral Home in Delmar. Online condolences may be sent to the family by visiting www.shortfh.com.

Joseph Michael Parker, 72, beloved husband, father, grandfather and friend, passed away peacefully on Sunday, February 14, 2021 at his home in Frankford after a long battle with several health issues. Mike was born on October 27, 1948 in Raleigh,... View Obituary & Service Information

The family of Joseph Michael Parker created this Life Tributes page to make it easy to share your memories.