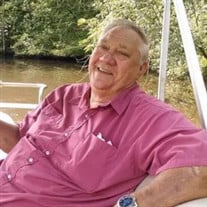 John Robert “Bob” Revel, 81, died Tuesday, August 18, 2020 at his home in Delmar. His work on earth was done, he was tired and ready to go home. He was born December 17, 1938 in Gumboro, a son of the late Carl Edward Revel and Mahaley Revel Cash. In his early days Bob worked as a long-haul truck driver then later worked as a construction foreman. He loved being around the water and shared his passion for fishing with his children, grandchildren and family. He had a true appreciation for watching the sunrise and would often drive to the beach just to watch the ocean. He also loved to fly and proudly earned his pilot’s license. His greatest passion was his family and he would do anything for his grandchildren and great-grandchildren. He had a special knack for making them all feel like they were his favorite. He is survived by his loving family, daughters Amy Hixon (Alan), Angie Meyer (Mike), Laurie Short (Buddy), Amy Swiezy (Stan), Debbie Phillips, Jamie Kilburn (Tim), Rickie Sutton and Misty Kelly, who was a granddaughter that was like another daughter to him; sons, Bruce Revel (Js), Mike Phillips (Kim) and David Phillips (Cheryl); 23 grandchildren, 41 great grandchildren and 3 great-great grandchildren; a sister, Ruth McDougal and her sons; and a brother-in-law and his wife, Alan and Darlene Smith. In addition to his parents he was preceded in death by his beloved wife, Joanne Lutz Revel, who passed in 2013; and sons, John Robert Revel, Jr., who passed in 2003 and Michael Alan Revel, who passed in 2013. A graveside service will be held on Tuesday, August 25, 2020 at 11:00 a.m. at Pittsville Cemetery. Bob would wish for you to give a hug to your family and friends in his memory or make a memorial contribution in his honor to the American Kidney Association by visiting www.kidney.org . Online condolences may be sent to the family by visiting www.shortfh.com. Arrangements are in the care of Short Funeral Home in Delmar.

The family of John Robert Revel created this Life Tributes page to make it easy to share your memories.

Send flowers to the Revel family.