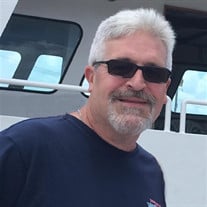 John Guthrie Midgette, IV, passed away peacefully at his home in Delmar, DE after a courageous ten-month battle with pancreatic cancer on July 9th, 2019. John was born March 27th, 1961 in Great Lakes, Illinois to June and John G. Midgette, III. Raised as a “Navy Brat,” John’s childhood was adventurous and took him and his family all over the country before settling permanently in Delmar, Maryland in 1977. In 1979 he graduated from Delmar High School; he then followed in his father’s footsteps and enlisted in the United States Coast Guard in 1980. He served as electrician’s mate until 1984. His best memories were aboard the USCGC Taney from 1980-1982, which he was recently able to visit again in Baltimore. Following his time in the service, he was employed by Deer’s Head Hospital as a maintenance electrician for almost 20 years. John’s greatest joy was always his family; he married his wife Regena in 1988 and welcomed their only son John the fifth in 1989. He enjoyed gardening, family dinners at his parent’s home, classic rock music, playing spades online, The Redskins and WWE; he enjoyed the simple things in life, and never took them for granted. He was preceded in death by his father, John G. Midgette III in 2007 and his wife, Regena in 2017. Left to carry on his legacy is his loving mother, June Midgette; his son, John G. Midgette V (Amanda); sisters, Annette Bradford (Milton), Michele Bower and Kim Bozman (Carson); and his favorite feline companion, Abby. He also leaves behind many cherished aunts, uncles, nieces and nephews, cousins, special friends, co-workers and neighbors. He will be sorely missed by many. A Celebration of Life fellowship will be held at the American Legion, Post 64, 1109 American Legion Road, Salisbury, MD 21801 on July 19th, 2019 at 1:00 p.m. Interment will be private. In lieu of flowers, John would have appreciated for you to donate to your local animal shelter in his name. Arrangements are in the care of Short Funeral Home in Delmar. Online condolences may be sent to the family by visiting www.shortfh.com.

The family of John Guthrie Midgette IV created this Life Tributes page to make it easy to share your memories.

John Guthrie Midgette, IV, passed away peacefully at his home...

Send flowers to the Midgette family.