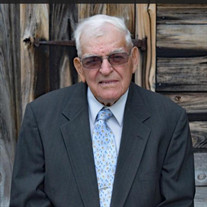 John W. Elliott, 98, of Delmar, passed away peacefully on Thursday, May 12, 2022, at his home, surrounded by his loving family. John was born in Delmar on March 22, 1924, a son of the late J. Thomas Elliott and Lillian Calloway Elliott. He was raised on the family farm in Delmar and spent most of his life in those fields that he loved. He graduated from Delmar High School with the class of 1942 and was the last surviving member of his class. John started working on the farm at a young age where he learned the value of hard work. He was riding tractors up until just a few years ago and to him there was only one kind or tractor – a red one. In his older years John loved to read and spend time in his garden. He was an active, lifetime member of Kings United Methodist Church where he served in many capacities. He was active in the community and served on the board of Laurel Hill Cemetery, along with other things. John never met a stranger and his infectious smile and his handshake were his trademarks. He is survived by his wife, Barbara Hedges West Elliott; a son, Jeff Elliott and wife Lisa of Delmar; step-children, Bonnie Atkins and husband Ray, Judy Pfeiffer, Wanda West, Melissa Culver and husband Ron, Michael West and wife Vanessa and Matthew West and wife Jamie; grandsons, Ryan Larney and Christopher Elliott; a special nephew, Tommy Elliott and wife Debbie; several nieces and nephews; and numerous step-grandchildren and step great grandchildren. In addition to his parents, he was preceded in death by his first wife, Dorothy Ellen Elliott, who passed in 1977 and his second wife, Irene Elliott, who passed in 1998; his brother, Paul Thomas Elliott; a sister Blanche Kirby; and a step-son, Howard Layton. A visitation for family and friends will be held on Tuesday, May 17, 2022, from 12:00 noon to 1:00 at Short Funeral Home in Delmar, followed by a funeral service to begin at 1:00. The Reverend Lisa Hines will officiate. Interment will follow in Laurel Hill Cemetery. Do to an increase in recent COVID-19 cases, the family requests attendees to wear a mask if able. In lieu of flowers, memorial contributions may be made in his memory to Kings United Methodist Church, 34591 Gordy Road, Laurel, DE 19956. Arrangements are in the care of Short Funeral Home in Delmar. Online condolences may be sent to the family by visiting www.shortfh.com.

John W. Elliott, 98, of Delmar, passed away peacefully on Thursday, May 12, 2022, at his home, surrounded by his loving family. John was born in Delmar on March 22, 1924, a son of the late J. Thomas Elliott and Lillian Calloway Elliott. He... View Obituary & Service Information

The family of John W. Elliott created this Life Tributes page to make it easy to share your memories.

John W. Elliott, 98, of Delmar, passed away peacefully on Thursday,...