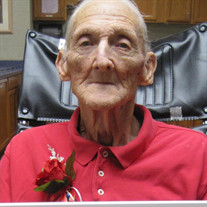 Jessie James Allen died peacefully in his sleep on January 18, 2021 at Salisbury Rehabilitation and Nursing Center in Salisbury, MD. He was 90 years old. Jessie was born in Dillon, South Carolina on August 25, 1930 to Maurice (Pete) and Willie Mae Allen. He was the second child with 2 other brothers and 1 sister, all of whom are deceased. Jessie enjoyed baseball and played on a local team where he played shortstop and occasionally pitched. He could throw a wicked knuckle ball that would cause batters to lunge into space while the ball ended up in the catcher’s mitt. Like many young men at that time he hoped to get noticed by scouts. Towards the end of WWII he enlisted in the army and later became a staff sergeant in the 367th Chemical Depot Co. At the beginning of his service, he was in the 25th Infantry Division (Pineapple Division). He was always very proud of the lightning on a pineapple insignia that identified his unit. Jessie was stationed in Osaka, Japan after the war ended. He was part of an engineering brigade that was tasked with rebuilding bridges and roads after much of the city was destroyed by allied bombing. He met his wife, Margie Allen (Kazuko Yanagi), who worked as a secretary at the base. After almost 4 years of service, he returned to the states and settled in the town of Hebron, Maryland where his mother, father and some of his siblings lived. He went to work at the Ralston Purina feed plant in Delmar, Delaware. Jessie continued to work at the plant for 30 years through multiple different owners. In addition to his regular work, he took care of 6 horses that were trained in the competitive discipline of eventing. This included jumping, hunting and cross country. After tragic fires destroyed the farm house he lived in and later the barns that housed the horses, he moved into town. After retiring, he became passionate about his vegetable garden and fruit trees. Jessie was especially proud of his pristine lawn which he diligently maintained. His greatest passion was fishing. Every late winter, early spring he would be found fishing from the shore of the Nanticoke River. He made sure to take pictures of some of the larger striped bass that he caught. Many would not have believed the size of the fish he caught, so he was ready with the evidence to silence any skeptics. He loved his 1972 Oldsmobile Cutlass Supreme and was constantly working on it. Margie and he were avid walkers and the townspeople of Hebron always saw them walking down the main road of the town. Jessie is survived by his wife of 70 years Margie Allen; 3 children, Aiko Allen, Santa Fe, New Mexico, Jesse Allen (Gina), Hayward, CA and Brenda Shockley (S. Glenn), Snow Hill, MD; 6 grandchildren and 9 great grandchildren. Burial will be held at a later date at the Eastern Shore Veterans Memorial Cemetery in Hurlock. Arrangements are in the care of Short Funeral Home in Delmar. Online condolences may be sent to the family by visiting www.shortfh.com.

Jessie James Allen died peacefully in his sleep on January 18, 2021 at Salisbury Rehabilitation and Nursing Center in Salisbury, MD. He was 90 years old. Jessie was born in Dillon, South Carolina on August 25, 1930 to Maurice (Pete) and Willie... View Obituary & Service Information

The family of Jessie James Allen created this Life Tributes page to make it easy to share your memories.

Jessie James Allen died peacefully in his sleep on January 18,...

Send flowers to the Allen family.