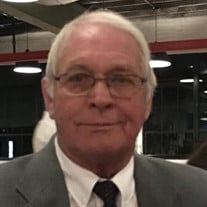 Jerry O. Campbell, 72, of Delmar, passed away peacefully with his family gathered around him on Thursday, November 28, 2019 at PRMC in Salisbury. He was born on April 30, 1947 in Salisbury, a son of the late George Oliver Campbell and Agnes Catherine (Parsons) Campbell. Jerry graduated from Delmar High School with the class of 1965 and from Goldey-Beacom College in 1967. He was a lifetime member of Melson United Methodist Church where he served as a lay leader and in various other capacities whenever needed. He was also an active member of Gideon’s International. Jerry worked in sales at Montgomery Wards before spending 20 years with Coca-Cola, and eventually retiring from Pepsi Cola Bottling Co. After retirement he worked for MAC, Inc. Meals on Wheels. Jerry loved his family, his church, and his community and will be remembered as a loving, selfless husband, father, grandfather, uncle and friend. He enjoyed helping people and would give the shirt off of his back to someone in need. He was always there to spread the word of God and minister to people whenever the opportunity arose. Jerry enjoyed fellowship with those he loved, watching old Western movies, news programs and was an avid golfer. He is survived by his wife, Doreen T. Campbell, who he married on October 18, 1997; daughters, Lori Smith (Rick) of Delmar, Teresa Parsons (Todd) of Delmar, Cathi Wood (Marty) of Delmar, and Shiloh Harris (Kevin Lewis) of Laurel; grandchildren, Olivia Hanshew (Tyler), Morgan Brewer (Tyler), Alexis Smith, Brandon Parsons, Josh Wood (Jessica Whaley), Hannah Wood, Trey Parsons, and Catherine Parsons; great grandchildren, Peyton, Oliver, and Addison: sisters, Faye Timmons of Powellville, Lynn Tamasi (John) of Salisbury, and Carolyn Campbell of Delmar; and several special nieces and nephews. In addition to his parents, he was preceded in death by his brother, Maurice Campbell. A funeral service will be held at 11:00 am on Wednesday, December 4, 2019 at Short Funeral Home in Delmar. A visitation will be held Tuesday, December 3, 2019 from 6 to 8:00 pm and on Wednesday one hour prior to the service. Reverend John Oltman will officiate. Interment will follow in Melson’s Cemetery in Delmar. In lieu of flowers, please consider a donation, in Jerry’s honor, to Melson U.M. Church, 32705 Melson Road, Delmar, MD 21875 or to Meals on Wheels, MAC, Inc., Somerset County Commission on Aging, 8928 Sign Post Road, Suite 3, Westover, MD 21871 or by visiting https://www.somersetmd.us/departments Arrangements are in the care of Short Funeral Home in Delmar. Online condolences may be sent to the family by visiting www.shortfh.com.

Jerry O. Campbell, 72, of Delmar, passed away peacefully with his family gathered around him on Thursday, November 28, 2019 at PRMC in Salisbury. He was born on April 30, 1947 in Salisbury, a son of the late George Oliver Campbell and Agnes... View Obituary & Service Information

The family of Jerry O. Campbell created this Life Tributes page to make it easy to share your memories.

Jerry O. Campbell, 72, of Delmar, passed away peacefully with...

Send flowers to the Campbell family.