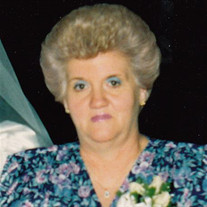 HEBRON- Janice Marie Merrill, 77, of Hebron, and formerly of Pittsville, passed away Sunday, March 24, 2019 at Peninsula Regional Medical Center in Salisbury. She was born September 24, 1941 in Swords Creek, Virginia, a daughter of the late Warren Mullins and Irene E. (Miller) Goswellin. In her younger days Janice worked as an inspector for Chesapeake Foods in Wango. Following that she followed in her family’s footsteps and worked for many years at the Gant Shirt Factory in Salisbury. Family was important to Janice and it started with her mother, Irene. They had a special bond and were inseparable, especially in the years before her passing in 2009. She loved watching baseball, especially when her grandchildren played little league or when her beloved Baltimore Orioles were playing. Christmas was Janice’s favorite time of the year and she left special memories of Christmases past for family to treasure. She also loved playing bingo and collecting lighthouses. She is survived by a daughter, Becky Baker of Salisbury; sons, Keith Thomas Merrill (Trudy Ann) of Delmar and Randy Dewayne Merrill (Jennifer Joy) of Hebron; grandchildren, Paul Baker, Jr., Shanna Baker, Andrew Austin Merrill (Keleigh), Thomas Frederick Merrill and Tyler Dewayne Merrill; greatgrandchildren, William Baker, Autumn Carson, Aubri Contreras, Seth James Baker and Stephen James Baker; a great-great grandson, Troy William Baker; a sister, Gloria Rodney of Snow Hill; and a brother, Randall Mullins (Cheryl) of Snow Hill. She is also survived by several nieces and nephews. In addition to her parents, she was preceded in death by a daughter, Stephanie Ann Joseph (2016); a sister, Patricia Mullins; great grandchildren, Bri’onna Baker and Amaris James Baker; and her stepfather, Austin “Gus” Goswellin. A funeral service will be held on Thursday, March 28, 2019 at 2:00 p.m. at Short Funeral Home in Delmar, where family and friends may call from 1:00 to 2:00. Interment will follow in Snow Hill Christian Church Cemetery. Memorial contributions may be made in her memory to Salvation Army Lower Eastern Shore, 407 Oak Street, Salisbury, MD 21804. Arrangements are in the care of Short Funeral Home in Delmar. Online condolences may be sent to the family by visiting www.shortfh.com.

HEBRON- Janice Marie Merrill, 77, of Hebron, and formerly of Pittsville, passed away Sunday, March 24, 2019 at Peninsula Regional Medical Center in Salisbury. She was born September 24, 1941 in Swords Creek, Virginia, a daughter of the late... View Obituary & Service Information

The family of Janice Marie Merrill created this Life Tributes page to make it easy to share your memories.

HEBRON- Janice Marie Merrill, 77, of Hebron, and formerly of...

Send flowers to the Merrill family.