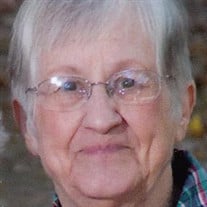 SALISBURY- Janet White Trader McNelia, 81, of Salisbury, passed away peacefully on Friday, March 22, 2019 after a short stay at Anchorage Nursing and Rehabilitation in Salisbury. She was born in Delmar on July 14, 1937, the daughter of the late Herman J. and Margaret Figgs White. Janet graduated from Delmar High School with the class of 1955 and stayed active with the Delmar Alumni Association until recently when health issues slowed her down. Working as a bookkeeper for Central Electric and C&P Hardware kept her mind sharp through the years and she remained that way right up until the end. Not being able to attend her beloved Melson’s United Methodist Church in Delmar for the past few months was hard on Janet. For many years she was an active member at Melson’s and could be found helping wherever needed. She loved watching football and was a huge Peyton Manning fan. Watching golf was also a favorite interest and rooted for Phil Mickelson whenever he was in contention. She will be remembered as a strong-willed, independent woman who loved helping others. She is survived by her brother and sister-in-law, Kenneth and Myrtle White; nephews, Kevin White (Jane) and Keith White (Wendy); and several great nieces and nephews. In addition to her parents she was preceded in death by her first husband, Charles W. Trader in 1983 and her second husband, Robert B. McNelia in 1995. A graveside service will be held on Thursday, March 28, 2019 at 11:00 a.m. at St. Stephen’s Cemetery in Delmar, officiated by Pastor John Oltman. In lieu of flowers, memorial contributions may be made in her memory to Melson’s United Methodist Church, 32705 Melsons Road, Delmar, MD 21875 or Coastal Hospice, P.O. Box 1733, Salisbury, MD 21802. Arrangements are in the care of Short Funeral Home in Delmar. Online condolences may be sent to the family by visiting www.shortfh.com.

SALISBURY- Janet White Trader McNelia, 81, of Salisbury, passed away peacefully on Friday, March 22, 2019 after a short stay at Anchorage Nursing and Rehabilitation in Salisbury. She was born in Delmar on July 14, 1937, the daughter of the late... View Obituary & Service Information

The family of Janet White Trader McNelia created this Life Tributes page to make it easy to share your memories.

Send flowers to the McNelia family.