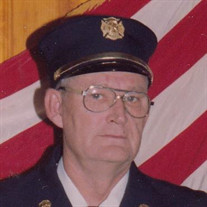 Snow Hill- James M. Phillips, 82, of Snow Hill, passed away on Friday, October 5, 2018 at Coastal Hospice at the Lake in Salisbury. He was born on August 27, 1936 in Gumboro, Delaware, a son of the late George S. and Flossie M. (Lewis) Phillips. After graduating from Millsboro High School, Jim proudly served his country in the U.S. Army from 1954 to 1957. After his discharge from the Army, he came to Snow Hill where he started working in printing for Moore Business Forms, a career that lasted over 37 years until he retired in 1994. After retirement he drove a truck for Ag-Chem in Girdletree for many years. He was a long time, active member of Bates Memorial United Methodist Church in Snow Hill, where he served in many ways on various committees. He was also a life member of the Snow Hill Volunteer Fire Department where he currently served as chaplain and Vice-President and a member of American Legion Post 67 in Snow Hill. His dedication for fire service led him to recently become active with the Worcester Co. Fire Police. In his earlier years, Jim enjoyed the outdoors by fishing and camping with family and friends and in later years enjoyed doing woodworking projects in his shop at home. He is survived by two sons, Glen Phillips (Barbara) and Bruce Phillips (Shannon) all of Snow Hill; grandchildren, Brooks Phillips (Carrie), Brian Phillips (Julie), Erin Phillips and Chase Phillips; great grandchildren, Caden and Blake; and several nieces and nephews. In addition to his parents, he was preceded in death by his beloved wife of 58 years, Earlene J. Phillips, who passed in 2016; and sisters, Olive Simpson, Hazel Adkins and Isabel Long. A funeral service will be held at noon on Wednesday, October 10, 2018 at Bates Memorial United Methodist Church in Snow Hill. A visitation for family and friends will be held one hour prior to the service. The Reverend Dr. Joseph Barth will officiate. Interment will follow the services in Olivet Christian Cemetery in Snow Hill. Memorial contributions may be made in his memory to Snow Hill Volunteer Fire Co, P.O. Box 83, Snow Hill, MD 21863, or Bates Memorial United Methodist Church, c/o Janice Skeeter, 102 E. Market Street, Snow Hill, MD 21863, or Coastal Hospice, P.O. Box 1733, Salisbury, MD 21802. Arrangements are being handled by Short Funeral Home of Delmar. Online condolences may be expressed at www.shortfh.com.

Snow Hill- James M. Phillips, 82, of Snow Hill, passed away on Friday, October 5, 2018 at Coastal Hospice at the Lake in Salisbury. He was born on August 27, 1936 in Gumboro, Delaware, a son of the late George S. and Flossie M. (Lewis) Phillips. After... View Obituary & Service Information

The family of James M. Phillips created this Life Tributes page to make it easy to share your memories.

Send flowers to the Phillips family.