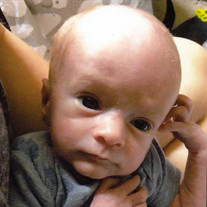 DELMAR- James Robert Joyner, 5 months old, the son of loving parents Joshua Robert Joyner and Brittany Nicole Knapp, became one of God’s angels on Sunday, December 16, 2018. He was born July 15, 2018 at Anne Arundel Medical Center in Annapolis. His miraculous journey was so unpredictable yet he survived in a way that surprised everyone, even his doctors and caregivers. While his short life here was a struggle, James was a fighter and brought so much joy to his family and those that loved him. He was happiest when playing in his tent, watching Mickey Mouse Clubhouse or when cuddling in his mom or dad’s arms as he held on tight to a finger. In addition to his parents, he is survived by grandparents, Robert and Lisa Joyner of Delmar and Russell and Christie Knapp of Salisbury; aunts and uncles, Isaiah, Jeremy and Gabrielle Joyner, Laurie Knapp, Matthew Guldan, Erika Lowicki (Shawn), Megan Willey (Connor) and Alexandra Knapp; and a great-grandmother, Marianne Decker-Bradley. A visitation will be held on Thursday, December 20, 2018 from 10:00 a.m. to 11:00 a.m., followed by a funeral service which begins at 11:00 a.m. Interment will be private. In his memory, contributions may be sent to the Delmar Fire Department, P.O. Box 143, Delmar, DE 19940 or Ben’s Red Swings, c/o CFES 1324 Belmont Ave. Ste. 401, Salisbury, MD 21804. Arrangements are in the care of Short Funeral Home in Delmar. Online condolences may be sent to the family by visiting www.shortfh.com .

The family of James Robert Joyner created this Life Tributes page to make it easy to share your memories.

Send flowers to the Joyner family.