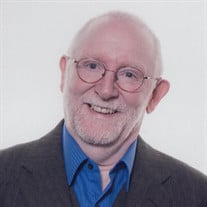 Delmar- James Howard Ford, born April 18, 1949 in Blanchester, Ohio to Howard Charles Ford and Betty June (Fox) Ford, passed away peacefully at home on May 22 in Delmar, Delaware where he had lived with his wife Jacqueline (Jankowski) for the past three years. He married Jackie in 1986 and spent thirty happy years with her near the shores of the Oswego River and Lake Ontario in Oswego, NY. He received his bachelor’s degree in Fine Art from the Miami University at Oxford, Ohio and later, his Master’s Degree in Fine Art from State University of New York at Oswego, where he had a long career as a Media Technician. He retired in April of 2014. As a creative artist and hands-on practitioner, Jim channeled his energies into a wide variety of hobbies, including classic car restoration, gemstone and mineral search, polishing and art creation but most importantly, his creative art endeavor in photography. He was a long-standing member of some on-line digital photography groups including Flickr, where he posted many of his works and received numerous accolades from fellow photographers. He also self-published a number of books featuring his digital creations. After retiring Jim could finally return to his childhood love of fishing. You could find him most mornings fishing along the Riverwalk in Oswego. There were many evenings spent with friends Frank and Irene Krul at Vona’s Restaurant, where they always lingered way too long, enjoying their laugh-fests. All the servers knew Frank and would always allow for their lengthy get-togethers. It was fishing on the Riverwalk where he met his dear friend, Todd Watson and they fished together both in Oswego and on Oneida Lake. When Todd suggested moving to Delaware's Eastern Shore in 2017, Jim and Jackie jumped at the chance to get away from the snowy winters of Central New York. Jim learned to love surf fishing and pulling skates and sharks from the ocean! The beauty of the Delmarva Peninsula and especially Assateague Island and the ocean was always a photographical inspiration for Jim. This was reflected in his digital photos, some of which grace the walls of their new home. Jim was predeceased by his father Howard. He is survived by his mother Betty June as well as his wife Jacqueline, his sister Jennifer and her three children Jamie, Julie and Michael and their children. Services are private. Arrangements are in the care of Short Funeral Home in Delmar. Online condolences may be sent to the family by visiting www.shortfh.com

Delmar- James Howard Ford, born April 18, 1949 in Blanchester, Ohio to Howard Charles Ford and Betty June (Fox) Ford, passed away peacefully at home on May 22 in Delmar, Delaware where he had lived with his wife Jacqueline (Jankowski) for the... View Obituary & Service Information

The family of James Howard Ford created this Life Tributes page to make it easy to share your memories.

Send flowers to the Ford family.