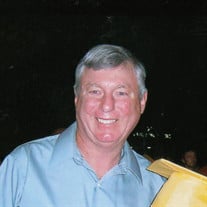 James Edwin “Eddie” Taylor, 69, of Hebron, passed away on Monday, September 10, 2018 at PRMC, Salisbury, Maryland with his loving family by his side. He was born on September 20, 1948 in Salisbury, a son of the late Robert and Marion Mills Taylor. In his early years, Eddie was an EMT and a member of the Hebron Fire Company, where he also played on the softball team. Eddie spent his career working for over 36 years as a cable splicer for the former C&P Telephone Co, which later became Bell Atlantic, then Verizon. After his retirement from Verizon, he worked for 12 years at Farmers & Planters. He was a member of the Temple Lodge #170 AF & AM, a 32 degree Mason, The Scottish Rites, AMSA, The Telephone Pioneers and a member of the American Legion Spring Hill Post 237 in Hebron. He will be remembered as an outdoorsman, with a love for hunting and fishing. He also attended Snethen United Methodist Church in Mardela Springs with his family. Most importantly, he enjoyed spending time with his daughter, Shelley, who meant the world to him. He is survived by his loving wife of 42 years, Anne W. Taylor of Hebron; a daughter, Shelley Anne Taylor; brothers, Charles R. Taylor (Cheryl) and Thomas Taylor (Connie) all of Hebron; sisters-in-law, Jane E. Wilson of Mardela Springs and Patricia Wilson of Arizona; and five nieces and nephews. In addition to his parents, he was preceded in death by his father- and mother-in-law, Arthur C. and Rebecca Bennett Wilson; and a brother-in-law, A.C. Wilson, Jr. A visitation for family and friends will be held at Short Funeral Home in Delmar from 6:00 pm to 8:00 pm on Monday, September 17, 2018 and also on Tuesday from 12:00 p.m. to 1:00 p.m. at the funeral home, followed by funeral services which begin at 1:00 p.m. Interment will follow the service in Springhill Memory Gardens in Hebron. In memory of Mr. Taylor, contributions may be sent to Snethen U.M. Church, c/o Jan Frey, 4203 Delmar Road, Delmar, DE 19940. Arrangements are in the care of Short Funeral Home in Delmar. Online condolences may be sent to the family by visiting www.shortfh.com.

The family of James Edwin "Eddie" Taylor created this Life Tributes page to make it easy to share your memories.

Send flowers to the Taylor family.