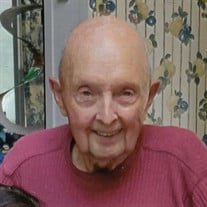 Jack Gordon Berger, 95, of Delmar, Delaware, passed away peacefully on Tuesday night, December 29, 2020 at TidalHealth Peninsula Regional Hospital in Salisbury, Maryland. Jack was born on November 3, 1925 in Winnetoon, Nebraska. Jack had two older sisters, Marjorie and Donnie. Their parents were Harry and Blanche Berger and they were a happy farming family in the close knit community of Verdigre, Nebraska. Jack often told how he rode a horse to school; a horse that was afraid of bridges and had to walk backwards across them. Jack was proud of his woodworking and sweet potato crop projects for school, to name a few. Jack had a high aptitude for math and he liked to read, both of which would serve him all his life. At age 17, Jack joined the Navy during World War II as a Radioman Second Class, stationed on the Pacific island of Guam. Although the island was full of coconut palms that Jack would climb, once Jack’s mom mailed him a coconut from Nebraska as a treat! Upon returning to Nebraska, Jack received an honorable discharge, and his paperwork says he received three medals, but even his son never knew this. Jack met his future wife, Anna Mae Grasso at a USO dance. She was a city girl from Omaha and he was a country boy. Jack entered the workforce with Western Electric and after their marriage in 1948, Jack and Anne took off in a car pulling a trailer home. They lived in that trailer for about 10 years and moved between trailer parks around the country wherever the work was. Whenever they moved for Jack’s work, Anne always found a local stenographer job very quickly. Jack and Anne moved to Alexandria, Virginia in the late 1950’s. Soon, Jack was recruited by the National Security Administration (NSA) in Maryland. Also, Anne was pregnant with their first child, Michael. Very soon after, they moved to a house in New Carrollton, Maryland. Seven years after Michael, Mark was born. Between 1987 and 2008, Jack became a proud Grandpa four times over. In 2003, Jack and Anne moved to Delmar, Delaware to be close to their son, Michael. And between 2009 and 2020, four great grandkids were welcomed. In total, there are 7 boys and 1 girl. Jack was EXTREMELY dedicated to his grandkids. Jack was the full-time roommate for, and the best buddy of, his last grandson, Joey, now 12. Jack and Anne were Joey’s full-time babysitters. Jack and Joey enjoyed time exploring outdoors. Jack and Anne faithfully attended Holy Redeemer Catholic Church in Delmar, Maryland. Jack was an avid flower gardener and reader. Jack leaves his family a beautiful garden. Jack and Anne also enjoyed breeding Pekingese dogs back in the day. Jack is survived by his son, Michael Joseph Berger and wife Andrea; grandchildren, Christopher Berger and fiancée, Becky Catterton, Racheal Olsen and husband Shawn, Tyler Berger, and Joey Berger; great grandchildren, Vincent, Mason, Cameron and Jack Tyler; a sister, Donna Maly; and many nieces and nephews. In addition to his parents, he was preceded in death by his wife, Anna Mae; his sister, Marjorie Woodhead; and a son, Mark John Berger. A visitation for family and friends will be held on Thursday, January 7, 2020 from 10:00 a.m. to 11:00 at Short Funeral Home in Delmar, followed by a funeral service which begins at 11:00. Due to current gathering restrictions, masks and social distancing will be required. Interment with military honors will follow at Delaware Veterans Memorial Cemetery in Millsboro. Memorial contributions may be made in his memory to Holy Redeemer Catholic Church, 514 Camden Avenue, Salisbury, MD 21801. Arrangements are in the care of Short Funeral Home in Delmar. Online condolences may be sent to the family by visiting www.shortfh.com.

The family of Jack G. Berger created this Life Tributes page to make it easy to share your memories.

Send flowers to the Berger family.