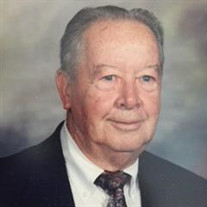 Irvine Powell, age 102, a resident of Cokesbury Village, Hockessin, Delaware passed away with family by his side on April 21, 2018. Mr. Powell attended Delmar High School, Delmar, DE, Class of 1936 and Goldey Beacom College in Wilmington, Class of 1938. Upon completion of his business school education, he began his employment with Hercules, Inc. of Wilmington, DE. In April 1941, he enlisted in the Army; serving in the European Theatre Headquarters in London, England and later in the Twelfth Army Group Headquarters in France and Germany. Prior to his discharge in December 1945, Mr. Powell was awarded the Bronze Star Medal. It is in Paris where Mr. Powell met and married his wife, Lucie E. Lemal. In January 1946, Mr. Powell rejoined Hercules, Inc. where he had a long career until his retirement in July 1977 as the Regional Office Manager in the Treasurer’s Department. Mr. Powell served on the School Board of the Richardson Park Elementary School. He also volunteered his time with the Junior Business Achievement program inspiring high school students to understand the benefits of a career in business. Mr. Powell was a member of Limestone Presbyterian Church, Hercules Men’s Club, and Hercules Country Club where he was an avid golfer. His other interests included spending time with family and friends, traveling, reading and spectator sports. After retirement, he enjoyed spending the winter months in Ocala, FL. Mr. Powell and his wife, Lucie E. Lemal, were married 34 years before her passing. He later married Mary G. Stevens for 15 years before her passing. Mr. Powell is preceded in his death by his sister, five brothers and his oldest son, James I. Powell. He is survived by a son David L. Powell (Liz) of Cornelius, NC; a daughter, Joan P. Jenaway (Bill) of King of Prussia, PA; a daughter-in-law (Kathy Price) of Rehoboth Beach, DE; a stepson, Mark E. Stevens of Wilmington, DE; two stepdaughters, Patricia Emmanuel (Bill) of West Chester, PA; Gail S. Walls (Jim) of Wilmington, DE, eleven grandchildren, five great grandchildren, and two nieces, Penny Milligan of Seaford, DE and Sharon Dorsey of Ocean City, MD. Mr. Powell was a gentleman, a faithful friend, and a loving family man. Affectionately known as PopPop, he will be missed by many. The family wishes to express their gratitude and sincere appreciation to all the staff of Cokesbury Village. In lieu of flowers, contributions in Irvine’s memory may be sent to the ACTS Legacy Foundation, Cokesbury Scholarship Fund (Memorial Gift), 726 Loveville Road, Hockessin, DE 19707 or Delaware Hospice, 16 Polly Drummond Center, 2nd Floor, Polly Drummond Shopping Center, Newark, DE 19711. A Celebration of his life will be planned later this spring at Cokesbury Village. Services and internment are private. Arrangements are in the care of Short Funeral Home in Delmar. Online condolences may be sent to the family by visiting www.shortfh.com.

The family of Irvine Powell created this Life Tributes page to make it easy to share your memories.

Send flowers to the Powell family.