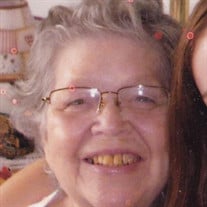 Huguette Cecile Laverrier Henri Layfield, passed away on Thursday, March 12, 2020 at Coastal Hospice at the Lake in Salisbury after a brief illness. She was born on October 29, 1938 in Canada. In her early years she moved to New Britain, Connecticut where she raised her family on Market Street and also lived in Vernon, Connecticut on West Street. Her children and grandchildren were her life and she looked forward to the visits and phone calls through the years. In her younger days she worked in a grocery store to help support her family before moving to the Eastern Shore, where she worked several years for the Joseph House in Salisbury. She enjoyed making people happy by making things with her husband and giving them to those in-need. In addition to helping others, Huguette loved sewing and crocheting, going out to eat, lighthouses and flowers. She is survived by a son, Carl and his family from Florida, and two daughters, Sylvia and her husband from Connecticut, and Lisa and her husband and family from Connecticut; five grandchildren; four great grandchildren; she also leaves behind her husband, George H. Layfield of Delmar and his family. In addition to her parents, she was preceded in death by 2 children, Ann and Paul; a sister; and a brother. Due to the recommendation of the CDC and the State of Emergency for the State of Delaware, March 17, 2020, the visitation and service will all be private and restricted to immediate family only. In lieu of flowers, donations in her memory may be sent to Coastal Hospice, P.O. Box 1733, Salisbury, MD 21802 or to the Parsonsburg Fire Department, P.O. Box 208, Parsonsburg, MD 21849 or to the Joseph House, 812 Boundary St, Salisbury, MD 21801. Online condolences may be sent to the family by visiting www.shortfh.com. Arrangements are in the care of Short Funeral Home in Delmar.

Huguette Cecile Laverrier Henri Layfield, passed away on Thursday, March 12, 2020 at Coastal Hospice at the Lake in Salisbury after a brief illness. She was born on October 29, 1938 in Canada. In her early years she moved to New Britain, Connecticut... View Obituary & Service Information

The family of Huguette Cecile Layfield created this Life Tributes page to make it easy to share your memories.

Send flowers to the Layfield family.