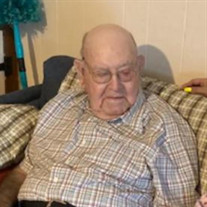 Howard F. West, 96, of a lifelong resident of Delmar, passed away peacefully at his home on Thursday, July 1, 2021. He was born December 6, 1924, in Melsons, a son of the late Edward Thomas West and Bessie Gertrude (Hastings) West. Howard was never afraid to get his hands dirty and worked on a farm most of his life. Raising chickens and beans and other crops, he was always at home on the farm. During his lifetime he also drove a school bus for many years, worked at the Eastern Shore Candy Company and even washed dishes at Schaeffer’s Family Restaurant in Selbyville. He was a former member of Melsons United Methodist Church and more recently a member of Peninsula Community Church in Selbyville. He loved to travel with Virginia and trips to the Amish country were his favorite. Howard loved working outdoors and took a lot of price in his lawn, flowers and landscaping. He held a special place in his heart for the family pets, especially “Lynzie” the Shih-tzu and “Polly” the family parrot. He will be remembered as a loving and caring husband, father, grandfather, great-grandfather and great-great grandfather. He is survived by his beloved wife of almost 74 years, Virginia R. (Layfield) West; a daughter, Carolyn M. Ross and significant other, Pat Berlien; grandchildren, Troy Luffman and Mackenzie Truitt (Melvin); great grandchildren, Miranda, Amanda, Dakota, Kyle, Jess and Madison; great-great grandchildren, Dallas, Delaney, Peyton and Autumn; and an honorary great granddaughter, Abby. He is also survived by several nieces and nephews. He was preceded in death by brothers, Marion Jacob West and Roy Edward West; a sister, Hattie Gertrude Tingle; and a son-in-law, Dennis Ross. A celebration of Howard’s life will be held on Thursday, July 22, 2021 at 11:00 a.m. at Peninsula Community Church in Selbyville. The Reverend Dr. Kenneth Smith will officiate. Memorial contributions may be made in his memory to Parsonsburg Volunteer Fire Department, 33030 Old Ocean City Road, Parsonsburg, MD 21849 or Peninsula Community Church, 28574 Cypress Road, Selbyville, DE 19975. Arrangements are in the care of Short Funeral Home in Delmar. Online condolences may be sent to the family by visiting www.shortfh.com.

Howard F. West, 96, of a lifelong resident of Delmar, passed away peacefully at his home on Thursday, July 1, 2021. He was born December 6, 1924, in Melsons, a son of the late Edward Thomas West and Bessie Gertrude (Hastings) West. Howard was... View Obituary & Service Information

The family of Howard F. West created this Life Tributes page to make it easy to share your memories.

Send flowers to the West family.