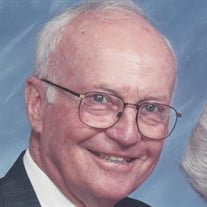 Hudson, Ohio- Herbert James Murphy, Jr., age 89, of Hudson, OH, formerly of Delmar, died Sunday, July 16, 2017, just 2 days shy of his 90th birthday. Herb was born July 18, 1927 in Buffalo, NY, a son of the late Herbert James Murphy, Sr. and Marcella (Cottrell) Murphy. He married “Med”, Mary Elizabeth Davis on September 16, 1949. Herb graduated from Newark High School before proudly serving his country in the U.S. Army during World War II. After the war he earned his degree from the University of Delaware in 1951. He began his career in the poultry industry in New Hampshire then joined Perdue Farms in 1954, where he was one of the first field service employees. He proudly worked for 37 years for Perdue before his retirement in 1991. Most of his career was spent in live production working with growers in all aspects of live production that included broilers, breeders, roasters and pullets. He was a farmer at heart and a true animal husbandry man. Herb marveled at the beauty of life in agriculture as exemplified by laying hens and dairy cows. Herb was involved as a member of Holy Redeemer Catholic Church where he served as an usher, Eucharistic minister, trained altar servers, served communion to shut-ins and was the general go-to person for anything involving the church which even included the landscaping. In 2006 he was honored to receive the “Order of Merit” award from the Diocese of Wilmington in recognition for his outstanding contributions to the Diocese. Herb enjoyed annual family camping trips to New England and the Canadian Maritimes. He traveled extensively with his wife, Med, across the U.S. and through Europe. His love of travel was passed on to his grandchildren and he was fortunate enough to have taken each one of them on their own special vacation. His love of the outdoors produced wonderful vegetable gardens and he was a member of the Salisbury Mall Walking Club. He is survived by his son, Bernard D. Murphy (Pat) from Charlottesville, VA; a daughter, Karen Murphy Schreckengost (Fred) from Hudson, Ohio; grandchildren, Aaron D. Murphy (Molly) of Vancouver, Washington, Adam D. Murphy of Delmar, Chad D. Murphy of Louisville, Kentucky, Erika N. Schreckengost-Schulz (Ben) of Gainesville, Virginia, Keri E. Schreckengost- Tarbert (Jason) of Denver, Colorado; great grandchildren, Charlotte A. Murphy and Henry D. Murphy; a sister, Noreen Murphy of Wilmington, Delaware; brothers, Robert D. Murphy of Arlington, Virginia and Thomas Murphy and wife Nancy; and two nieces. In addition to his parents, he was preceded in death by his wife of 59 years, Mary Elizabeth “Med” Murphy. The Mass of Christian Burial will be held 2:00 pm on Saturday, July 22, 2017 at Holy Redeemer Catholic Church, E. Chestnut St. in Delmar, MD with Father Ray Weisman officiating. Family and friends may call at the church from 1:00 to 2:00. Burial with military honors will be in St. Stephen's Cemetery. In lieu of flowers, contributions can be made in memory of Herbert J. Murphy '51 to the College of Agriculture & Natural Resources at the University of Delaware. Gifts will support the planned renovation of Worrilow Hall. Please send contributions to: University of Delaware, Gifts Processing, 83 E. Main St, 3rd Fl., Newark, DE 19716. Make checks payable to 'University of Delaware' and include on the memo line "in memory of Herbert J. Murphy '51 ". Gifts can also be made on the University of Delaware's secure website, www.udel.edu/makeagift." Arrangements are in the care of Short Funeral Home in Delmar. Online condolences may be sent to the family by visiting www.shortfh.com. .

The family of Herbert James Murphy Jr. created this Life Tributes page to make it easy to share your memories.

Send flowers to the Murphy family.