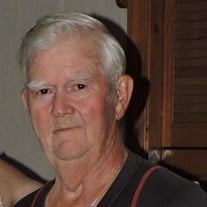 Harry Lane Foxwell, 79, of Delmar passed away on Sunday, May 3, 2020 at his home surrounded by his loving family. He was born on January 6, 1941 in Delmar, a son of the late Harry and Louise (Hearn) Foxwell. During his years in high school, Harry worked as a grocery boy on Saturday’s and after school, delivering groceries for Caldwell’s Market in Delmar and also worked with Harold Elliott in carpentry. After graduation, he served in the National Guard for six years, and then spent 30 years as a maintenance mechanic for Dupont Company in Seaford. After retirement, he went to work driving cars for Barrett Chevrolet in Berlin and making Thursday delivery trips from Salisbury to Cheriton for Nyquist. He was raised First Baptist, but after his marriage he became a member of Melson’s United Methodist Church in Delmar. Harry will always be remembered for the many hats he knitted. The simple task of teaching his granddaughters to knit with a loom turned into a hobby that he became known for. He and Ginny knitted many hats for schools, homeless shelters, and churches from yarn donated from local churches, they would knit over five hundred hats every year. Family was very important to Harry, and spending time camping in Chincoteague and Roaring Point in Nanticoke with his family was time well spent. He will be remembered as a loving husband, father, and grandfather. He is survived by his loving wife of 56 years, Virginia L. “Ginny” Foxwell; daughter, Ronda L. Cooper; granddaughters, Cayla Morgan Cooper and Amber Brooke Cooper; half-brother, Allen Reustle; family Jack & Karen Bailey, sisters-in-law, Louise Foxwell and Patricia Foxwell; nieces and nephews, Barney Foxwell (Donna), Rex Foxwell (Lee), Dawn Pollitt (David), Frank Hamilton (Kelly), Teresa Williams (Bob), and Rick Hamilton (Wendy),and several great nieces and nephews. In addition to his parents, he was preceded in death by his son-in-law, Randy J. Cooper; brothers, Marion L. “Barney” Foxwell and Roger D. Foxwell; and a sister, Virginia Ann Foxwell. Due to the current gathering restrictions, a private service has been planned. In lieu of flowers, memorial contributions may be sent to Melson’s United Methodist Church, 32705 Melson Road, Delmar, MD 21875. Arrangements are in the care of Short Funeral Home in Delmar. Online condolences may be sent to the family by visiting www.shortfh.com.

Harry Lane Foxwell, 79, of Delmar passed away on Sunday, May 3, 2020 at his home surrounded by his loving family. He was born on January 6, 1941 in Delmar, a son of the late Harry and Louise (Hearn) Foxwell. During his years in high school,... View Obituary & Service Information

The family of Harry Lane Foxwell created this Life Tributes page to make it easy to share your memories.

Harry Lane Foxwell, 79, of Delmar passed away on Sunday, May...

Send flowers to the Foxwell family.