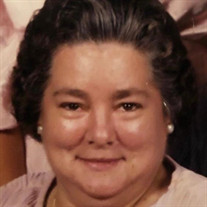 Harriet May Cropper, 77, of Delmar passed away on Monday, March 4, 2019 at the Delmar Nursing & Rehab Center after a long battle with Alzheimer’s. She was born on January 6, 1942 in Wilmington, Delaware, a daughter of the late Ralph Wesley Russum, Sr. and Mary Rebecca (Comegys) Russum. Harriet enjoyed going to church and attended Faith Baptist Church as well as Laurel Baptist when she was able. She enjoyed her family. Doing crafts, playing board games, and sports with her grandchildren were some her favorite times. Sitting in the front yard talking or gardening with Bill was a summertime enjoyment. Harriet worked as a care giver at local nursing homes as well as private sitting. She is survived by her children, Greg Cropper (Patti), Lori Staples (Rick), Joseph Cropper (Mary), Billy Cropper (Michele), George Cropper (Judy), and Leslie Mills (Keith); 22 grandchildren, 23 great grandchildren; a sister Peggy Musgrave; and several nieces and nephews. Special and significant care was given by her granddaughter Kelly Staples who helped oversee her care and treatment over the last several years. In addition to her parents, she was preceded in death by her husband, William H. Cropper, Sr., two brothers, four sisters and a step-son, Daniel Cropper. A funeral service will be held at 11:00 am on Saturday, March 9, 2019 at Short Funeral Home in Delmar. A visitation for family and friends will be held one hour prior to the service. Interment will follow the services in St. Stephens Cemetery in Delmar. In memory of Mrs. Cropper, contributions may be sent to the Alzheimer’s Association by visiting www.alz.org. Arrangements are in the care of Short Funeral Home in Delmar. Online condolences may be sent to the family by visiting www.shortfh.com.

Harriet May Cropper, 77, of Delmar passed away on Monday, March 4, 2019 at the Delmar Nursing & Rehab Center after a long battle with Alzheimer&#8217;s. She was born on January 6, 1942 in Wilmington, Delaware, a daughter of the late Ralph Wesley... View Obituary & Service Information

The family of Harriet May Cropper created this Life Tributes page to make it easy to share your memories.

Harriet May Cropper, 77, of Delmar passed away on Monday, March...

Send flowers to the Cropper family.