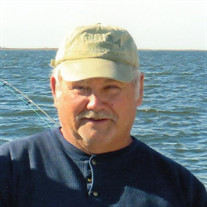 DELMAR- Gregory Lane Bedsworth, 63, of Delmar, passed away peacefully at his home on Saturday, September 2, 2017, surrounded by his loving family. He was born July 12, 1954 in Salisbury, the son of the late William Henry Bedsworth and Gladys Catherine (Bozman) Bedsworth, fondly known as “Tootsie”. Greg was raised in Dames Quarter and attended school on Deal Island. He graduated from Washington High School with the class of 1972. After graduation he started a life long career as an accomplished electrician in the poultry industry and worked for Perdue, Townsends and Mountaire. In the later years he and a partner formed Dawson and Bedsworth Electric out of Georgetown, from where he retired in 2012. He loved his work and took great pride in providing for his family. He also loved the outdoors and fishing,especially the “rock” seasons on the bay, cutting grass and riding his tractor. Greg had a special place in his heart for animals and especially loved his dog, “Pepper”, and his horses and goats. He will be sorely missed as a loving husband, father, brother,Pop-Pop, father-in-law, friend and employer. He is survived by his wife of 43 years, Donna Bedsworth; daughters, Heather Lynn Adkins (David) and Heidi Lane Payne (Woody), all of Delmar; grandchildren, Jade Leigh Payne, Luke Hackett and Summer Lane Payne; and a sister, Terrie Wallace (Barry) of Salisbury. A visitation will be held on Thursday, September 7, 2017 from 12:00 p.m. to 2:00 at Short Funeral Home in Delmar, followed by a funeral service which begins at 2:00. The Reverend David Webster, a lifelong friend, will officiate. Memorial contributions may be made in Greg’s memory to Delaware Hospice, 100 Patriot’s Way, Milford, DE 19963 or Somerset United Methodist Church, in care of Debbie Jacobson, 11150 Messick Road, Dames Quarter, MD 21821. Arrangements are in the care of Short Funeral Home of Delmar. Online condolences may be sent to the family by visiting www.shortfh.com

DELMAR- Gregory Lane Bedsworth, 63, of Delmar, passed away peacefully at his home on Saturday, September 2, 2017, surrounded by his loving family. He was born July 12, 1954 in Salisbury, the son of the late William Henry Bedsworth and Gladys... View Obituary & Service Information

The family of Gregory Lane Bedsworth created this Life Tributes page to make it easy to share your memories.

Send flowers to the Bedsworth family.