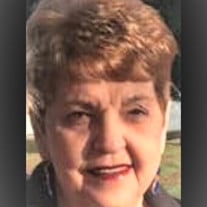 Her journey on this earth began December 13, 1942 in Salisbury, MD. She was the daughter of the late Grover Cleveland Adkins, Sr. and the late Pauline Maryjane Murray Adkins Nichols. She was called home October 7th, 2020. She is survived by her husband of 45 years, George W. Bradford, Jr. She loved Dirt Track Racing, especially cheering on her son Richard D. Whaley and granddaughter, Amanda “Wild Child” Robinson. She enjoyed competitive bowling, playing cards with friends and family, and baking with her grandchildren. She was known for her fudge, magic cookies, tandy cake, baked pineapple, and wet cornbread. She loved the Yankees (and we all teased her about that) and the Minnesota Vikings. She competed in tractor pulls with her husband George in the ‘70’s. During the family’s farming years, she and George enjoyed owning and operating a produce stand on Route 50. She then spent 15 years of service at Hebron Savings Bank, retiring in 2005. In addition to her husband George, she is survived by her daughter, Connie Little (Mike); son, Rick Whaley (Carrie); step-son, Mike Bradford; grandchildren, Chris Bradford (Deanna), Jessica Correll, Erin Soriano (Chris), Leslie Twining (Brad), JD Mumford, Megan Derr (Jason), Josh Mumford, Casey Whaley, Ryan Bradford, Amanda Robinson (Ross), Tana Bradford, and Payton Whaley, and 11 (and soon-to-be) 12 great-grandchildren. She is also survived by her siblings, Gomer Adkins (Debbie), Larry Adkins (Shirley), Jeannie Wootten (Gary), Freddie Adkins (Suzanne); sisters-in-law, Iris Shockley (Jim), Mary Jane Adkins, and several nieces and nephews. She was preceded in death by her son, Donnie Adkins; step-daughter, Jackie Mumford; and her brother, Bill Adkins. A visitation for family and friends will be held on Tuesday, October 13th, from 6-8pm at Short Funeral Home in Delmar. A graveside service will take place at Springhill Memory Gardens on Wednesday, October 14th at 11am. In lieu of flowers, donations can be made to the Wicomico County Humane Society, 5130 Citation Dr., Salisbury, MD 21804. Arrangements are in the care of Short Funeral Home in Delmar. Online condolences may be sent to the family by visiting www.shortfh.com.

Her journey on this earth began December 13, 1942 in Salisbury, MD. She was the daughter of the late Grover Cleveland Adkins, Sr. and the late Pauline Maryjane Murray Adkins Nichols. She was called home October 7th, 2020. She is survived by... View Obituary & Service Information

The family of Geraldine Mary Bradford created this Life Tributes page to make it easy to share your memories.

Send flowers to the Bradford family.