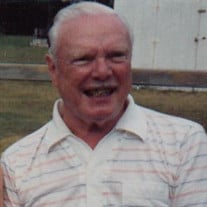 Gerald F. Lutz, Sr., age 101, died Wednesday, May 16, 2018 at the Delmar Nursing and Rehabilitation Center. He was born January 14, 1917 in Dayton, Ohio, a son of the late Harry Porter Lutz and Lillian Peters Lutz Eves. In 1933 Mr. Lutz’s family moved to Washington, D.C. He proudly served his country for 30 years in the U.S. Navy, Army and Air Force Reserves. He retired from Air Force headquarters as a Chief Master Sgt. with the 909th Combat Support Squadron. From 1956 to 1973 he worked for the White House as Assistant Superintendent of the White House Reception and Security Office, a job he truly loved. In 1973 he was appointed Chief Bailiff for the Prince George’s County Courthouse, a position he held for 10 years. During his time in the D.C. area, he also served several years as a volunteer fireman. Mr. Lutz was a 32nd degree Mason and was a life member of Potomac #5 Blue Lodge in Washington, D.C. He was also a Shriner at the Almas Temple in Washington and a member of the Legion of Honor. He served as a member and past commander of the American Legion, Post 15 in Washington, D.C. and was an honorary Kentucky Colonel. After he and his wife retired and moved to the Eastern Shore they became members of Centenary United Methodist Church in Laurel and lovingly volunteered at the Good Samaritan Shop in Laurel. He loved his life on the Shore and loved his wife’s home cooking. Mr. Lutz had seen so much in his lifetime and had a great knowledge of history of which he loved to share with family and friends. One of his fondest memories of his time living in D.C. was working as a hotel doorman. It was 1937, and the Redskins had just moved from Boston and he quickly made friends with the players and coaches. Some of the players took him out for his bachelor party the night before his wedding, making him a lifelong Redskins fan. He shared his Redskins’ passion with his son, with whom he loved to watch games. With his daughter he enjoyed playing Wheel of Fortune and Jeopardy almost every night and stayed sharp until the end. He also loved playing cards with his granddaughter, Kim. In 2003 he lost his wife of 66 years, Helen L. Talley Lutz. He was also preceded in death by a son, Jerry. He is survived by a son, Ron Lutz and wife Virginia of Churchton, Maryland; a daughter Sandra L. Becker of Delmar; a daughter-in-law, Nancy Lutz; 11 grandchildren; 15 great grandchildren and 6 great-great grandchildren. A memorial service will be held at a later date. Arrangements are in the care of Short Funeral Home of Delmar. Online condolences may be sent to the family by visiting www.shortfh.com.

The family of Gerald F. Lutz Sr created this Life Tributes page to make it easy to share your memories.

Send flowers to the Lutz family.