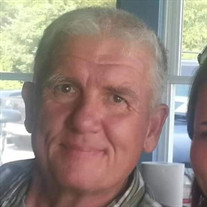 On Saturday, January 29, 2022, George R. McGinnity, Jr., loving husband, beloved father of four children, nine grandchildren, and four great-grandchildren, entered into eternal life at age 69. George was born on May 31, 1952 in Baltimore, Maryland to George and Marjorie McGinnity, Sr. He graduated from Kennard-Dale High School in 1970 with aspirations of becoming a nautical engineer in the U.S. Coast Guard, until the untimely death of his mother, at the young age of 36. He went on to co-found McGinnity & Son Taxidermy in New Freedom, Pennsylvania, with his father. They became one of the leading pioneers in fiberglass replicas of fish and other marine life in addition to being a highly regarded member of the National Taxidermy Association with world-wide patrons and recognition for their artistic creativity and flawless representation of wildlife. He settled on the Eastern Shore in 1987 taking up residence in Delmar, Delaware, where he worked as a construction contractor and first mate on a fishing charter boat out of Ocean City, Maryland, for many years. George and his son-in-law, Billy Adkins, later established and operated a successful, highly respected, and sought-after residential drywall company for close to 25 years. He was known for his love of the outdoors, especially hunting and fishing. When asked which one he likes most, he’d say, “I like hunting, but I love fishing!” The true success story of his life was the love and adoration he had for his wife and soulmate of 52 years, Sharon, and their children and grandchildren. He devoted himself to the teaching and passing on his wisdom and knowledge in craftsmanship and the outdoors, not just to his children and grandchildren, but to everyone that was lucky enough to know him. He was preceded in death by his father, George R. McGinnity Sr. and his mother Marjorie Jean Stricker McGinnity. His spirit is carried on and lived through his beloved wife, Sharon Lynn Blevins McGinnity, their four children, Stacey Adkins (Billy, Jr), Stephanie Moore (David Adkins), George R. McGinnity, III (Leslie), and Amanda Fuhrman (Michael); grandchildren, Trystin Insley (Christian), Billy Adkins, III (Katlyn), Kayla Adkins, Autumn Moore, Geordan McGinnity, Madison Moore, Andrew Fuhrman, Alayna Adkins, and Abby Fuhrman; great-grandchildren, Azlyn, Linya, and Everest Insley, and Grace Adkins; his favorite sister, Polly Lewis (Michael); sister-in-law, Joanne Eyler (Herb); brother-in-law, Wayne Blevins (Sharon); his beloved dog, Doc, and many loved friends and family too numerous to list, but not forgotten. A celebration of George’s life will be held in the spring at a yet to be determined date. In lieu of flowers, the family has requested that contributions be sent to local non-profit Beyond Your Walls Inc., P.O. Box 1428, Salisbury, MD 21802, in memory of George. Arrangements are in the care of Short Funeral Home in Delmar. Online condolences may be sent to the family by visiting www.shortfh.com

The family of George R. McGinnity Jr. created this Life Tributes page to make it easy to share your memories.

Send flowers to the McGinnity family.