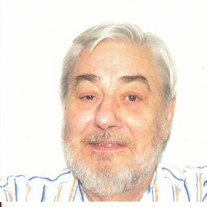 George Edward Majors, 81, of Delmar, passed away peacefully at Bayhealth Milford Memorial Hospital on Tuesday, May 4, 2021. He was born August 10, 1939 in Mardela Springs, a son of the late James Edward Majors and Rozella Wilson Majors. George graduated from Mardela High School with the class of 1957. Not long after graduation he enlisted in the US Air Force and proudly served his country until his honorable discharge in 1960. During his time in the Air Force he started his college education at Syracuse University where he studied Russian Language. After his return to the Eastern Shore, George earned his BS at Salisbury State College. In 1965 he married Phyllis and together they shared almost 56 years of marriage. His career in data processing started at Perdue in his early days. He went on to work for several other poultry companies before starting his own business, GEM Data Processing in Delmar. After closing the business in 1993, he continued to work for some of his bigger clients and worked until his illness forced him to retire. He was a long time active member of Calvary Baptist Tabernacle in Salisbury, where he served as a deacon for many years. Gospel music was George’s passion and he was well known in the business as the “camera man.” His love for photography grew as the years went and he was privileged to photograph weddings and many family events. He loved to travel and was fortunate enough to travel around the world. He lived life to the fullest and made friends wherever he went. Family was important to George and he rarely missed a ball game or school function when his sons were growing up. As the children grew and started to spread out, he enjoyed organizing family reunions, usually a trip to an exciting part of the country and sometimes with over 100 family members in attendance. George was always thinking and learning, loved to read and was a member of MENSA International. He will be remembered as a wonderful husband, father, grandfather, great- grandfather and friend to many. He is survived by his wife, Phyllis Majors; sons, David Lee Majors (Barbara Ann), Lonnie Russell Majors (Emiko Namata) of Japan and George Edward “Eddie” Majors (Leah Jeannette Crouch) of South Korea; grandchildren, Daniel Majors (Amy), Christina Howard (Warren), Yuki Majors and Kiato Majors; great grandchildren, Logan, Lacey and Kaylee; and sisters, Rebecca Patterson and Shauna Majors. He is also survived by many nieces and nephews. In addition to his parents, he was preceded in death by a sister, Brenda Lee Majors; and a brother-in-law, Bill Patterson. A visitation for family and friends will be held on Tuesday, May 11, 2021 from 11:00 a.m. to 12:00 p.m. at Calvary Baptist Tabernacle, 337 Tilghman Rd, Salisbury, MD 21804, where a service will follow at 12:00 noon. Masks and social distancing will be required due to current COVID-19 restrictions. The Reverend Lou Bradley will officiate. Interment will follow at Springhill Memory Gardens in Hebron. Memorial contributions may be made in his memory to Calvary Baptist Tabernacle or your favorite charity. Arrangements are in the care of Short Funeral Home in Delmar.  Online condolences may be sent to the family by visiting www.shortfh.com.

George Edward Majors, 81, of Delmar, passed away peacefully at Bayhealth Milford Memorial Hospital on Tuesday, May 4, 2021. He was born August 10, 1939 in Mardela Springs, a son of the late James Edward Majors and Rozella Wilson Majors. George... View Obituary & Service Information

The family of George Edward Majors created this Life Tributes page to make it easy to share your memories.

George Edward Majors, 81, of Delmar, passed away peacefully at...

Send flowers to the Majors family.