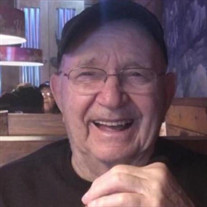 George L. Hearn, 91 years young, passed away at his home on Monday, May 2, 2022. He was born February 15, 1931, in Philadelphia, Pennsylvania, a son of the late Paul Franklin Hearn and Beatrice H. (Elliott) Hearn. At an early age George learned to work with his hands and taught himself how to rebuild carburetors and generators while also working at the Philadelphia Bowling Alley. In 1950 George started his career as a power operator at the DuPont Co. in Seaford, from where he retired in 1985. He proudly served his country in the US Navy from 1951 to 1955. He also served the Town of Laurel as building inspector for several years. Being good with his hands, George became a skilled handyman who could build or fix almost anything. He had a huge heart for family, friends, and neighbors. He was often called on to do carpentry, windows, and roofing, mostly out of the goodness of his heart, not for the money. After retirement George and his late wife Marjorie loved to travel and go to concerts when able. He definitely made the best out of retirement. All those that knew George knew that he was a lifelong NY Yankees fan and was rarely spotted without his Yankees hat. He will be remembered as a loving husband, father, grandfather, great grandfather, brother, and friend to many. He is survived by his children, Scot Hearn and wife Debbie of Seaford and Lisa Adams of Delmar; grandchildren, Sara Cutright, Joshua Hearn and wife Shayna and Lauren Fleetwood; and great grandchildren, Riley, Preston, and Jude. He is also survived by brothers, Marion “Hearney” Hearn of Seaford and Paul Hearn of Georgia, and many nieces and nephews. In addition to his parents, he was preceded in death by his beloved wife, Marjorie Hastings Hearn. A graveside service will be held on Friday, May 6, 2022, at 11:00 a.m. at Laurel Hill Cemetery in Laurel. The Reverend Dean Perdue will officiate. Memorial contributions may be made in his memory to the Blood Bank of Delmarva by visiting www.delmarvablood.org or mailing to Blood Bank of Delmarva, P.O. BOX 419354, Boston, MA 02241-9354. Arrangements are in the care of Short Funeral Home in Delmar. Online condolences may be sent to the family by visiting www.shortfh.com.

George L. Hearn, 91 years young, passed away at his home on Monday, May 2, 2022. He was born February 15, 1931, in Philadelphia, Pennsylvania, a son of the late Paul Franklin Hearn and Beatrice H. (Elliott) Hearn. At an early age George learned... View Obituary & Service Information

The family of George L. Hearn created this Life Tributes page to make it easy to share your memories.

George L. Hearn, 91 years young, passed away at his home on Monday,...

Send flowers to the Hearn family.