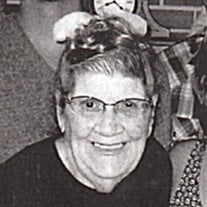 Genevieve Sparrow Elliott, 91, beloved mother and grandmother, died March 30, 2018 at her home at Sandy Lane Farms in Mardela Springs, MD surrounded by her family. She was born on November 29, 1926 in Delmar, MD, the daughter of the late George Wesley Sparrow, Sr. and Lucy Lang Sparrow. She is survived by her son and three daughters: Phillip Elliott of Mardela Springs, Gamee Elliott of Salisbury, Genene Elliott Murphy and her husband John of Denton, TX, and Gigi Elliott Perdue and her husband Dean Perdue of Laurel, DE. She is survived by three grandchildren: Jack Murphy of Houston, TX; Peter Murphy of Bethesda, MD; and Gillian Murphy of Denton, TX. She is also survived by several nieces and nephews. In addition to her parents, she is also preceded in death by her husband, Milton Elliott; and three brothers, George Sparrow, Jr., Billy Sparrow, and John “Jack” Sparrow, Sr. We would also like to acknowledge her caregivers, Patty Manning, Sadie Dear, Bonnie Johnson, and Guerline “LiLi” Joseph. We would also like to thank our Coastal Hospice team, especially her nurse, Ruth Walker, who provided exceptional care. She was a member of Emmanuel United Methodist Church in Mardela Springs, Past Regent of the Nanticoke Chapter NSDAR and a member of the Order of the Eastern Star Adah Chapter 5. She was a longtime member of the Wicomico County Farm Bureau and a Past President of the Wicomico County Homemakers. She was a Sunday School teacher and a leader of the Methodist Youth Fellowship at the Emmanuel United Methodist Church. She was a substitute teacher for elementary schools in Mardela, Hebron and Sharptown. She served on the Wicomico County Department of Recreation and Parks Advisory Board and she volunteered as a judge at the Wicomico Farm and Home Show. She was the leader of the Shamrock 4-H Club in Mardela Springs. She was a Past President of the Northwestern Elementary PTA in Mardela Springs. She played in the Wicomico County six-hit volleyball league and was the coach of the Powder Puff softball team in Mardela. She was a Mardela High School Band Aide. She was a very special lady who was loved and admired by all who knew her. She will be missed. A visitation for family and friends will be held at the Short Funeral Home, 13 E. Grove Street in Delmar on Saturday, April 7, at 9 am. A funeral service will follow at 11 am officiated by her son-in-law, Rev. Dean Perdue. Interment will follow in the Mardela Memorial Cemetery next to her husband, Milton Elliott. Memorial contributions may be made in her memory to Emmanuel United Methodist Church, PO Box 126, Mardela Springs, MD 21837 or Coastal Hospice, PO Box 1733, Salisbury, MD 21802. Arrangements are in the care of Short Funeral Home in Delmar. Online condolences may be sent to the family by visiting www.shortfh.com.

Genevieve Sparrow Elliott, 91, beloved mother and grandmother, died March 30, 2018 at her home at Sandy Lane Farms in Mardela Springs, MD surrounded by her family. She was born on November 29, 1926 in Delmar, MD, the daughter of the late George... View Obituary & Service Information

The family of Genevieve Sparrow Elliott created this Life Tributes page to make it easy to share your memories.