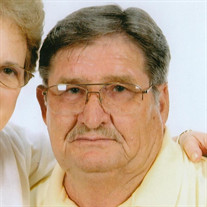 Gene Alvin Hendricks, 79, of Laurel passed away peacefully on Sunday, May 23, 2021 at his home surrounded by his loving family. He was born on June 4, 1941 in Lynchburg, Virginia, a son of the late Ninie Brooks and Virginia Hendricks. In his early days Gene drove a tractor trailer before starting his career driving a truck for ETD News out of Wilmington and retired in 1997 after many years of service. After retirement he was happy to be home and tinker on lawnmowers and small engine repairs for friends and neighbors. Racing was one of Gene’s many passions. He continued to drive until the age of 57, always styling and profiling. Even after he stopped racing he was always behind the scenes supporting his family’s racing endeavors. Baseball was another passion. In his younger days, he coached tee-ball and Little League, and more recently he enjoyed being in the stands rooting for his grandchildren and his son that has returned to the play the game of baseball. He loved the outdoors, especially fishing, camping and trips to the beach. He could often be found treasure hunting at flea markets and auctions, always searching for vintage toys and great bargains. He also loved going to car shows, admiring antique cars and showing his cars at local car shows. Gene never met a stranger and even looked forward to going to cardiac rehab, where he quickly made wonderful friends with many of the others. Gene also had a huge heart for pets and treated his dogs and birds like family. Most importantly, he will be remembered as a loving husband, father, grandfather and friend to many. He is survived by his wife of almost 47 years, Barbara Hendricks; children, Eugene Chad Hendricks of Wilmington, Steve Hendricks of Spartanburg, SC, Georgianna Mullen (Lawrence) of Middletown, Virginia Hendricks of Laurel, and Nicholas Hendricks (Angela) of Laurel; grandchildren, Lawrence Tyler, Sara, Gionna, Jadon, Bryce, Trent, Alisha, Kristie, Carter, Joshua, Gene, Ashley, Lacey, Paige, Anne, Dana and Jeanie; several great grandchildren. He is also survived by several nieces and nephews. In addition to his parents, he was preceded in death by his daughter, MaryAnn Hendricks; grandson, Paul; and his brother, Chester Hendricks. A funeral service will be held on Thursday, May 27, 2021 at 11:30 a.m. at Short Funeral Home in Delmar. A visitation for family and friends will be held one hour prior to the service. Interment will follow at Laurel Hill Cemetery. In memory of Mr. Hendricks, contributions may be sent to the Brandywine SPCA- Georgetown Campus, 22918 Dupont Blvd, Georgetown, DE 19947. Arrangements are in the care of Short Funeral Home in Delmar. Online condolences may be sent the family by visiting www.shortfh.com.

Gene Alvin Hendricks, 79, of Laurel passed away peacefully on Sunday, May 23, 2021 at his home surrounded by his loving family. He was born on June 4, 1941 in Lynchburg, Virginia, a son of the late Ninie Brooks and Virginia Hendricks. In his... View Obituary & Service Information

The family of Gene A. Hendricks created this Life Tributes page to make it easy to share your memories.

Gene Alvin Hendricks, 79, of Laurel passed away peacefully on...

Send flowers to the Hendricks family.