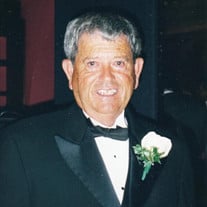 Gary Theodore Cooper, 85 years old, from Delmar, formerly of Lothian and Hyattsville, MD died Wednesday, May 5, 2021 after a courageous seven year struggle with MDS (a rare blood cancer disorder) at his home with his devoted wife of 62 years by his side. He was born July 14, 1935 in Frederick, MD, a son of the late June and Theodore Cooper of Washington, D.C. Gary graduated from Woodrow Wilson High School in Washington, D.C. with the class of 1953 and was a proud graduate of Shepherd College (now university) in Shepherdstown, West Virginia in 1958. While in college, he worked year round at Charlestown Racetrack exercising horses and caring for them in the stables. He had a true love for all animals especially horses and dogs. He and his entire family returned to Shepherd for homecoming many years in the fall and had a wonderful time. This was very special for Gary. They always had a golf tournament and he enjoyed playing with his sons Mark, Matthew and daughter-in-law, Karen. What a foursome! After graduation from college, Gary joined the Army Reserves serving from 1958-1964 at which time he had completed his service obligation. In May 1959 Gary married his lifetime partner and true love Beverly Elaine (Ballard) Cooper. He taught school in Prince Georges County, Maryland for 25 years retiring in 1986. He taught both elementary and high school. His great passion in high school was teaching golf and being the coach for many years at Frederick Douglass High School in Croom, Maryland. His current memberships are National Education Association, Shepherd College Alumni Association, AARP, American Legion and Maryland State Racing Commission. He spent many years when his sons were growing up serving as a coach for baseball, basketball, and football teams for Little Leagues. He was certified by the American Red Cross and taught CPR and swimming, and was active in the Power Squadron, American Legion, and school PTA. While teaching school, he spent the summers with family in West Ocean City and worked at the harness track for 55 years. He truly loved the work at the track with the horses. Gary also enjoyed hunting, fishing, golfing, crabbing, clamming, swimming, boating, going to baseball games and football games. He was a Washington Redskins ticket holder for over 50 years. He enjoyed everything and was always ready to do and go. He always looked forward to his weekly golf outings with his golfing buddies at Ocean City Golf & Country Club. In addition to his wife, he is survived by his son, Mark and his wife Karen of Bishopville and their children Kristin Stortini of Rockville and Paul Stortini of Philadelphia; daughter-in-law, Denise K. Cooper of Delmar; sister-in-law, Lesley Ballard Todd (Mark) of Stevensville, MD; brother-in-law, Gary Ballard (Aggie) of Laurel, MD, brother-in-law, Roger Ballard (Mary) of Chester, MD, sister-in-law, Barbara Ballard of Elizabethton, TN. He was preceded in death by a brother-in-law Lester “Pee-Wee” Ballard of Elizabethton, TN; twin sons who died in infancy; beloved son, Matthew Ballard Cooper who died April 20, 2020. A service in Thanksgiving for the life of Gary Cooper will be held at St. Paul's by-the-Sea Episcopal Church, 302 N. Baltimore Avenue, Ocean City, MD on Wednesday, July 14, 2021 at 1:00 p.m. The family asks that you dress casual. Following the service, the celebration will continue at Ocean City Golf & Country Club, 11401 Country Club Drive, Berlin, MD for a great time by all. Please note, to use the elevator entrance at church, use orange doors at northwest corner of the building. In lieu of flowers, anyone wishing to honor Gary’s memory may make a donation to The MDS Foundation, Inc., 4573 South Broad Street, Suite 150, Yardville, NJ 08620. Please enclose a note that the donation is in memory of Gary T. Cooper, and the acknowledgment- Beverly E. Cooper, 8692 Barbara Ann Way, Unit 104, Delmar, MD 21875.

Gary Theodore Cooper, 85 years old, from Delmar, formerly of Lothian and Hyattsville, MD died Wednesday, May 5, 2021 after a courageous seven year struggle with MDS (a rare blood cancer disorder) at his home with his devoted wife of 62 years... View Obituary & Service Information

The family of Gary Theodore Cooper created this Life Tributes page to make it easy to share your memories.

Send flowers to the Cooper family.