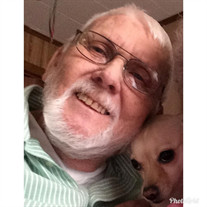 LAUREL- Freddie Allen Prettyman, 66, of Laurel, Delaware, passed away Sunday, April 8th, 2018, surrounded by his family. Freddie was born August 2nd, 1951 in Salisbury, MD, to Raymond Insley and Mae Agnes Prettyman and was the youngest of six children. He graduated from the Laurel Senior High School in 1969 and was an avid member of the FFA. He was a poultry farmer for 36 years and worked for the Laurel School District as a custodian for nearly 20 years. He loved farming and any excuse to be on his tractor. When he wasn’t working, Freddie liked to attend livestock and farm machinery auctions, raise livestock of his own, hunt or trap game and watch old westerns. Freddie is survived by his wife of nearly 43 years, Shirley Ann Prettyman and their beloved dog, Roxy and cats, Cleo and Maxine; his six children, Lee Hastings of Salisbury, MD, Jessica (Bill) Gaull, Darrell (Patricia) Hastings, Glena (Michael) Larmore, Julie (Morris) Davis and Mark (Sarah) Prettyman, all of Laurel; his four siblings, Esther (Clark) Hastings of Laurel, Clara Belle Littleton of Seaford, Robert (Joyce) Prettyman and Samuel (Shirley) Prettyman, both of Delmar; sixteen grandchildren and twelve great-grandchildren. He was preceded in death by his parents Raymond and Mae, his sister Martha Ellen, who passed away as an infant, and his brother-in-law Richard Littleton. A private memorial will be held. Arrangements are in the care of Short Funeral Home in Delmar. Online condolences may be sent to the family by visiting www.shortfh.com.

The family of Freddie Allen Prettyman created this Life Tributes page to make it easy to share your memories.

Send flowers to the Prettyman family.