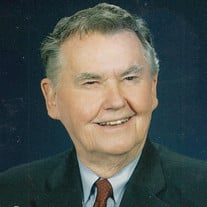 Fred Hastings Baker, Sr, 88, of Delmar, passed away on Thursday, September 6, 2018 at his home in Delmar. He was born on May 2, 1930 in Delmar, Delaware, a son of the late Helen M. and Frank W. Baker, Sr. He graduated from Delmar HS in 1948, University of Delaware in 1952 with a BA in History. Fred received his Master’s Degree in English from University of Delaware in 1979. Fred served as a Lieutenant JG in the US Navy from 1953 through 1957, stationed for much of that time in Hawaii. He married the former Barbara Ann Schumacher on November 15, 1956. They were married for 42 years, until the time of her death, August, 1998. Fred spent the majority of his career as an English instructor at Delaware Technical and Community College in Georgetown, DE. His teaching style influenced many students. He retired as English Department Chair in 1991. Fred and his wife Barbara were the owners and proprietors of the Columbus Villa apartments and commercial property on 6th Street, Ocean City, MD, Fred spent the last 20 years of his life enjoying time with friends, keeping physically fit through cardiac rehab at PRMC, and thrift shopping on the Eastern Shore. Through his retirement, GDad spent many hours with his grandchildren, taking them to various sports activities, feeding them at many restaurants, and entertaining them with his personal brand of humor. He is survived by his children, Fred H. Baker, Jr. of Delmar, and Paula Baker Coulbourn and her husband, S. Brent of Seaford; grandchildren, Spencer B. Coulbourn, Jr., Elizabeth A. Coulbourn, Olivia S. Baker, Liam A. Baker, and Benjamin A. S. Baker; and a daughter-in-law, Michelle Baker. Fred is also survived by his sister-in-law, Patricia S. Oliphant and husband, Ronald; and their children Veronica O Faust, and Paul J. Oliphant, as well as many other cherished members of Fred and Barbara’s extensive family. In addition to his parents, he was preceded in death by his wife, Barbara Ann Baker; a brother, Frank W. Baker, Jr.; and a sister, June Baker Rawlins. A visitation for family and friends will be held from 6:00 pm to 8:00 pm on Thursday, September 13, 2018 at Short Funeral Home, 13 E. Grove Street in Delmar. A funeral service will be held at 11:00 am on Friday, September 14, 2018 at St. Stephens United Methodist Church, State Street in Delmar, where a visitation will be held one hour prior to the service. The Reverend Phyllis Walton will officiate. Interment will follow the service in St. Stephens Cemetery. In memory of Mr. Baker, contributions may be sent to the American Cancer Society, an organization that is very special to the family. Arrangements are in the care of Short Funeral Home in Delmar. Online condolences may be sent to the family by visiting www.shortfh.com.

The family of Fred Hastings Baker Sr created this Life Tributes page to make it easy to share your memories.

Fred Hastings Baker, Sr, 88, of Delmar, passed away on Thursday,...

Send flowers to the Baker family.