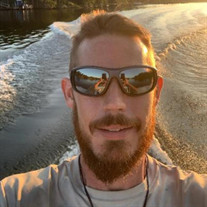 Franklin “Frankie” Selby Parker, III, 36, of Eden, passed away Thursday, April 21, 2022, due to injuries sustained in an automobile accident. He was born January 28, 1986, in Salisbury, a son of Franklin Selby Parker, Jr. and Carla Faye (Merrill) Parker of Quantico. In his younger days Frankie worked for his family’s roofing business and for some time with Tree Tech. He proudly earned his CDL and went to work for Davis Trucking in January. Driving a truck allowed him to see different parts of the country. Not only did he love driving a truck but also loved motorcycles, spending time on his boat and his dogs “Miley” and Scooby.” His greatest passion was his family. Sunday family dinners or just playing outside with his kids were when Frankie was the happiest. In addition to his parents, he is survived by daughters, Alexis, Abbigale and Alivia; son, Grayson; sister, April L. Kerfoot and husband Rick, and their children, Kerrigan and Aidan; grandmother, Willa Merrill; girlfriend, Hilary Presley; and aunt and uncle, Donna and Pat Hurley. He is also survived by several cousins and a host of friends. A visitation for family and friends will be held on Friday, April 29, 2022, from 12:00 noon to 1:00 at Short Funeral Home in Delmar, with a funeral service to begin at 1:00. Pastor Jack Jester will officiate. Interment will follow at Springhill Memory Gardens in Hebron. Arrangements are in the care of Short Funeral Home in Delmar. Online condolences may be sent to the family by visiting www.shortfh.com.

The family of Franklin S. Parker III created this Life Tributes page to make it easy to share your memories.