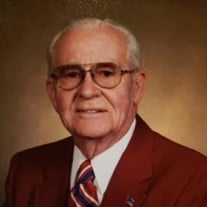 Francis Windsor Hopkins, 93, of Mardela Springs, passed away peacefully on Thursday, September 3, 2020 at Coastal Hospice at the Lake in Salisbury. He was born April 9, 1927 in Mardela Springs, a son of the late James W. Hopkins and Hilda Kennerly Hopkins. “Hop,” as he was known by many, spent most of his life in his beloved Mardela Springs and graduated from Mardela High School. After graduation he proudly served his country in the U.S. Navy during World War II. Following his discharge from the Navy he attended Salisbury Teacher’s College and the University of Baltimore. It was in his younger days that his career as a bus driver began and he worked many years for Trailways and the Red Star Bus Co. and to Hop’s account, he was the last surviving Red Star driver. He also drove a school bus for Wicomico County for over 25 years. Serving small town Mardela and the surrounding communities was important to him as he was a long time member of Emmanuel United Methodist Church in Mardela and a life member of the Mardela Springs Volunteer Fire Department. “Hop” had many talents, but dancing and singing were some of his favorites. He sang for many years in several barber shop quartets. He will be remembered for his warm and caring smile, his love for his community and love for his family. He is survived by grandchildren, Tyler Hopkins (Rachael) of Delmar and Erin Davis (Matthew) of Millsboro; great grandchildren, Morgan, Lydia, James, Adalyn and Lyla; a special nephew, Randy Beers (Shelli); a daughter-in-law, Lisa Hopkins Jones (Art); and longtime companion, Kay Burkindine, and her children, Rose Jenkins (Steve), Sharon Sass (Don), Johnny Luffman (Cindy) and Julia Dailey. He is also survived by many friends. In addition to his parents, he was preceded in death by his beloved wife, Almeda Elzey Hopkins; a son, James “Jimmy” Hopkins; a brother, Merle Hopkins; and a sister, Janice Hopkins Beers. A visitation for family and friends will be held on Wednesday, September 9, 2020 from 11:00 a.m. to 1:00 p.m. at Short Funeral Home in Delmar. Due to current COVID-19 restrictions, masks and social distancing will be required. Funeral services will be private. The Reverend Gary Tulak will officiate. Memorial contributions may be made in his memory to Emmanuel United Methodist Church, c/o Randy Beers, 9272 Athol Road, Mardela Springs, MD 21837. Arrangements are in the care of Short Funeral Home in Delmar. Online condolences may be sent to the family by visiting www.shortfh.com.

Francis Windsor Hopkins, 93, of Mardela Springs, passed away peacefully on Thursday, September 3, 2020 at Coastal Hospice at the Lake in Salisbury. He was born April 9, 1927 in Mardela Springs, a son of the late James W. Hopkins and Hilda Kennerly... View Obituary & Service Information

The family of Francis W. Hopkins created this Life Tributes page to make it easy to share your memories.

Send flowers to the Hopkins family.