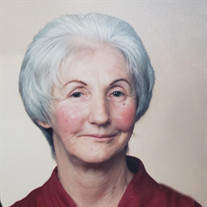 DELMAR- – Frances H. Myer of Delmar, passed away Tuesday, July 3, 2018, at Delmar Nursing and Rehabilitation Center after a long illness. Born on January 22, 1934 in Freeport, Illinois, she was the daughter of the late William Hays and Winifred Hays Artman. Frances was known as Peggy and later in life affectionately known to all as “Gran.” In her youth, Peggy traveled around the country sightseeing with her best friend June Bentley and on one of their trips to Tennessee, June introduced Peggy to her future husband, Paul A. Myer, Sr. Peggy enjoyed going to the beach, tending her flower beds, and spending time outside. She loved summertime. When their children were young, she was at home holding down the fort while Paul traveled all around the east coast working with Standardbred horses. With children in tow, she soon joined her husband (and later her sons) working with the horses. She enjoyed many good years and had many dear friends at the racetracks. “Gran” to her grandchildren, Peggy spent many years caring for them and making lasting memories. Whether on a trip to the beach, ball in the backyard, or reading to them, she was always available with her unconditional love. She was their staunchest ally and greatest supporter and they loved her dearly. Through their 62 years together, Paul and Peggy remained in love and devoted to each other and they faced together whatever life had in store for them. Until his passing this past January, Paul steadfastly cared for Peggy throughout her illness even visiting her daily at Delmar Nursing Home, bringing her breakfast, and helping care for her there. They were truly a remarkable couple. In addition to her parents, Peggy was preceded in death by her husband, Paul, son Wade, and brothers William Hays and Leo Artman. She is survived by her daughter Pamela Schablein and husband Kevin, Pittsville, son Paul A. Myer, Jr., Delmar, grandchildren Tuesday Taylor and Jared Schablein, great-grandchildren, Melanie, Lily, and Landon, sister-in-law Betty Artman, and many nieces and nephews. In lieu of flowers, contributions may be made in her memory to Alzheimer’s Association, 108 N. Bedford Street, Georgetown, DE 19947 or to a charity of your choice. Following cremation, services will be private. Arrangements are in the care of Short Funeral Home in Delmar. Online condolences may be sent to the family by visiting www.shortfh.com.

DELMAR- &#8211; Frances H. Myer of Delmar, passed away Tuesday, July 3, 2018, at Delmar Nursing and Rehabilitation Center after a long illness. Born on January 22, 1934 in Freeport, Illinois, she was the daughter of the late William Hays and... View Obituary & Service Information

The family of Frances H. Myer created this Life Tributes page to make it easy to share your memories.

Send flowers to the Myer family.