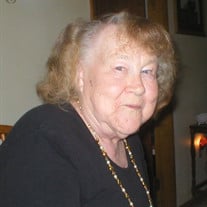 SALISBURY- Frances Adena Davis, 89, of Salisbury, passed away peacefully at her home on Wednesday, September 5, 2018. She was born April 18, 1929 in Salisbury, a daughter of the late Harold James Long and Sarah Olive Smullen Long. Adena came from a large, hard-working family. She left school early to work to help the family, as was common in those times. She worked as a telephone operator for the former C&P Telephone Co. and retired after 39 years of service. She was a wonderful cook and her family will certainly miss her fried chicken. For many years Adena collected dolls and she loved to garden and work in her flowers. She will be remembered as a loving mother, grandmother, great grandmother and sister. She is survived by children, Linda Davis, Holly Cantwell, Joseph Davis, Kenneth Davis and Vincent Davis; 9 grandchildren; 10 great grandchildren; brothers, Marvin Long, Donald Long and Eldred Long; and several nieces and nephews. In addition to her parents, she was preceded in death by her husband, Donald Vincent Davis, who passed in 2005; and sisters, Helen Holloway and Doris Norman. A visitation for family and friends will be held on Monday, September 10, 2018 from 10:00 a.m. to 11:00 a.m. at Short Funeral Home in Delmar, followed by a funeral service which begins at 11:00. Pastor Gordon Nock will officiate. Interment will follow at Springhill Memory Gardens in Hebron. Memorial contributions may be made in her memory to Coastal Hospice, P.O. Box 1733, Salisbury, MD 21802. Arrangements are in the care of Short Funeral Home in Delmar. Online condolences may be sent to the family by visiting www.shortfh.com.

SALISBURY- Frances Adena Davis, 89, of Salisbury, passed away peacefully at her home on Wednesday, September 5, 2018. She was born April 18, 1929 in Salisbury, a daughter of the late Harold James Long and Sarah Olive Smullen Long. Adena came... View Obituary & Service Information

The family of Frances Adena Davis created this Life Tributes page to make it easy to share your memories.

Send flowers to the Davis family.