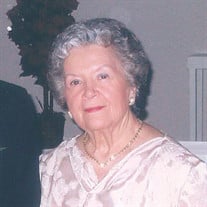 Florence Ward McGee, 93, of Delmar, Maryland, passed away at Scottish Pines Nursing Home in Laurinburg, NC, on Tuesday, May 22, 2018. A graveside service will be 5:00 p.m. Thursday, May 24, 2018 at Hillside Memorial Park. Services will be conducted by her nephew, Stephen Jones. Florence was born in Laurel, Delaware to the late Harry and Lula Elliott Ward. She moved to North Carolina in 1946, where she met and married Ralph McGee in 1956. They relocated to Delmar, Maryland in 1959, and opened a Hair Salon, calling it RayFlo Beauty Salon. They operated the salon until 2016. Florence also worked as a hair stylist for Marvel and Short Funeral Home from 1959 to 2016. Florence was a charter member of the Delmarva Evangelistic Church in Salisbury. She was active in the church serving as the director of the Little Choir for ages 6-14 years; and was also a Sunday school teacher for 25 years. Florence sang in the church choir and also in a group called the Sound of Praise for many years, singing gospel music in various churches in Wilmington, Delaware, Baltimore, Maryland and the Eastern shore. At an early age, Florence and her sister Dorothy played guitars and sang in the Nazarene church in Laurel, Delaware. Florence was the first female to serve on the Delmar, Maryland City Council. She later became the first female Mayor of Delmar and was instrumental in getting homes for the elderly. She is survived by three brothers-in-law, Jimmy McGee, Jerry McGee and Ronnie McGee; nephews, David Jones, Stephen Jones, Robert Jones, Craig McGee, Travis McGee and Ronnie McGee, Jr.; nieces, Brenda Wright, Helen Guinn, Jackie Womble, Kim Morgan, Lisa Ellis and Christi Norton. She is preceded in death by her beloved husband, Ralph McGee Jr., son, Philip, sisters, Helen Callaway and Dorothy Lord, sister-in-law, Margaret McGee Radford and niece, Ellen Radford Weeks. Arrangements by McDougald Funeral Home in Laurinburg, NC

Florence Ward McGee, 93, of Delmar, Maryland, passed away at Scottish Pines Nursing Home in Laurinburg, NC, on Tuesday, May 22, 2018. A graveside service will be 5:00 p.m. Thursday, May 24, 2018 at Hillside Memorial Park. Services will be conducted... View Obituary & Service Information

The family of Florence Ward McGee created this Life Tributes page to make it easy to share your memories.

Florence Ward McGee, 93, of Delmar, Maryland, passed away at...

Send flowers to the McGee family.