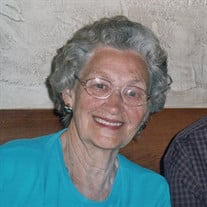 DELMAR – Emily Jane Elliott Sullivan, 90, of Delmar, passed away peacefully on Friday, July 12, 2019 at Lakeside at Mallard Landing, Salisbury, Maryland. She had been a resident there for 15 months, but home to her was the house in Delmar that her father and husband built in 1951. Jane was born on October 26, 1928 in Delmar, Delaware, the only child of the late Harold and Mildred White Elliott. She graduated with the class of 1946 from Delmar High School in Delmar, Delaware. After graduation Jane attended Beacom Business College in Wilmington, Delaware, and graduated early. On May 8, 1948, she married Norman Gilbert Sullivan of Delmar, Maryland. After marriage, Jane worked as a stenographer for DuPont Nylon Plant in Seaford, Delaware. Following the birth of her two children, she spent many years working as a bookkeeper for Culver’s Men Shop in Delmar. Her bookkeeping career continued when she went to work for Delmarva Health Centre, a chiropractic office in Delmar. Even in her eighties, you could find her helping her grandson at Panichella Greenhouses in Delmar. For eight years she spent numerous hours planting flowers, assisting customers, and watering plants. Jane’s greatest love was spending time with her family. Along with “Peanut,” they could regularly be found cheering on their grandchildren at sporting events. Birthday and holiday celebrations, where the whole family could be together, were very special to her. She also enjoyed entertaining friends and neighbors in her home, playing cards, and making peanut brittle and homemade ice cream. She had a real passion for doing many kinds of handwork, including sewing, crocheting, knitting, cross-stitching, as well as needlepoint and ceramics. As an avid walker, she enjoyed walking to the post office, to her hairdresser’s house, and uptown to the pharmacy. Jane was an active member of St. Stephen’s United Methodist Church in Delmar for over 70 years, where she helped with countless dinners. She enjoyed fellowship with the ladies in the Deborah Circle, as they worked to raise money for the church. As a member of the Junior Auxiliary Board at Peninsula Regional Medical Center, she volunteered many hours doing clerical work, and crocheting hats for newborns. Jane was also a member of the Ladies Auxiliary VFW, and active in the Delmar New Century Club and Red Hats. In addition to her parents, she was preceded in death by her husband of 61 years, Norman “Peanut” Sullivan, who passed in May 2009. She is survived by her son, Terry Sullivan (Katy), of Oxford, Maryland, her daughter, Norma Sullivan Panichella (Danny), of Delmar; four grandchildren, Nick Panichella, Chris Sullivan (Allison), Adam Panichella (Alison), and Kelly Sullivan Litz (Aaron); one great grandson, Thatcher Ellis Sullivan; and many nieces and nephews. A funeral service to honor her life will be held at noon on Wednesday, July 17, 2019, at Stephen’s United Methodist Church in Delmar. Visitation will be held one hour prior to the service. Pastor Phyllis Walton will officiate. Interment will follow at St. Stephen’s Cemetery, Delmar. In lieu of flowers, contributions can be made to St. Stephen’s UMC in Delmar, or to the Alzheimer’s Association at https://www.alz.org/texascapital/donate. Arrangements are in the care of Short Funeral Home in Delmar. Online condolences may be sent to the family by visiting www.shortfh.com.

DELMAR &#8211; Emily Jane Elliott Sullivan, 90, of Delmar, passed away peacefully on Friday, July 12, 2019 at Lakeside at Mallard Landing, Salisbury, Maryland. She had been a resident there for 15 months, but home to her was the house in Delmar... View Obituary & Service Information

The family of Emily Jane Sullivan created this Life Tributes page to make it easy to share your memories.

Send flowers to the Sullivan family.