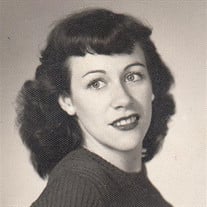 Elsie M. Cayaves, age 97, of Salisbury, Maryland died peacefully on January 3, 2020 at Coastal Hospice at The Lake. She was born in Choptank, MD on November 22, 1922 to Omar L. and Ruth E. (Williamson) Fulton. She was the eldest of ten siblings. She attended school in East New Market. In 1938, Elsie met and married William E. Cox Sr. of Wilmington, Delaware and began her family. Widowed at age 23, she sang professionally to support herself and her two children. She later moved to Boulder, Colorado residing there for six years prior to returning to the Eastern Shore in 1960. She was past guardian of the International Order of Job’s Daughters Charter Bethel 26 in Boulder, Colorado. She was employed as an assistant to the Somerset County Clerk of Court for several years before becoming a children’s wear buyer at Benjamin’s. In 1968, Elsie married Dr. Paul G. Cayaves and moved to Salisbury. She managed all aspects of his medical practice until their retirement. Elsie also devoted many years and much love providing care for her parents. Elsie loved nature, especially the beauty of butterflies and seashells. She will be remembered for her energetic spirit, her ability to persevere, her sense of humor and her beautiful smile. Elsie is survived by her children, Mary Reid of Princess Anne, MD and William E. Cox Jr. of Erie, CO; grandchildren, William E. Cox III, Shari Donoway, Alisa Crockett (Blair), Steven Reid (Sunny), Christian Reid (Janine); great grandchildren, Philip Donoway (Claudia), Aimee Wiles (Justin), William E. Cox IV, Chase Ashley, Taylor Reid, Victoria Reid, Ava Reid; great-great grandchildren, Caroline Crockett, Ariella Donoway, and Waylon Wiles; sisters, Yvonne Kelly and Francine Brooks (Chad). Brothers; Omar Fulton Jr., Eugene Fulton (Jane), Lowell Fulton; a devoted niece, Carol Cayaves; sister-in-law, Jonica Fulton; many nieces and nephews; the Andrews family, the Reid family, the Crockett family, the Ladies of the Roundtable, and the many friends she has gathered along the way. In addition to her parents, she was predeceased by her husband, Paul G. Cayaves; a brother, Craig Fulton; sisters, Thelma Colflesh, Constance Kenny, and Virginia Braid; son-in-law, Richard Reid; daughter-in-law, Amelia Cox; several nieces and nephews;and her beloved dog, Tiger. The family would like to extend a special thanks to her special caregivers who became her friends, and the staff of Atria Assisted Living and Coastal Hospice for the care they showed during her illness. A memorial service will be held at 1:00 p.m. on Saturday, January 18, 2020 at Short Funeral Home in Delmar. A visitation for family and friends will be held one hour prior to the service. Father Ron Knapp will officiate. A time of fellowship will follow the service at the Delmar Fire Department. In memory of Mrs. Cayaves, contributions may be sent to Coastal Hospice, P.O. Box 1733, Salisbury, MD 21802. Arrangements are in the care of Short Funeral Home in Delmar. Online condolences may be sent to the family by visiting www.shortfh.com.

Elsie M. Cayaves, age 97, of Salisbury, Maryland died peacefully on January 3, 2020 at Coastal Hospice at The Lake. She was born in Choptank, MD on November 22, 1922 to Omar L. and Ruth E. (Williamson) Fulton. She was the eldest of ten siblings.... View Obituary & Service Information

The family of Elsie M. Cayaves created this Life Tributes page to make it easy to share your memories.

Send flowers to the Cayaves family.